“
In an alternate universe (that is, any other universe but ours) either this would have been accounted for or a different route chosen.—(quoting myself, 11/16/2015)
”

Should Honolulu’s rail officials quit, as the City Council chair is reported to be asking in this Star-Advertiser story today?

The story cites a letter from Martin that refers to utility pole clearance issues that were known to rail officials some time ago:

“I find it very disturbing to learn that HECO’s concerns were first raised three years ago and yet the guideway has been built too close to the utility poles on Farrington and Kamehameha Highway for workers to safely maintain and repair them,” Martin wrote.

Such clearance issues now threaten to drive up costs further and could delay the project’s completion by another year, officials say.

Certainly, this neglect should be dealt with. But the City Council itself is responsible for the choice of elevated rail technology and for settling on the route—and includes congested and narrow Dillingham Boulevard. Will they take responsibility for their choice?

Should the cost of shoehorning an overhead guideway into this morass have been figured into the budget early on? Certainly. From the very beginning, this section of the route should have been scrutinized as a particularly difficult bottleneck in the rail project.

There are other concerns as well, including disruption during construction causing irreparable harm to businesses along the route, and what exactly Dillingham Boulevard will look like after the ugly elevated structure goes up. It’s not exactly pretty now…

Anybody could see this snafu coming, and certainly responsible rail officials should have pulled out their abacuses early on and figured the cost to resolve clearance issues along the route including Farrington Highway, Kam Highway, and soon Dillingham Boulevard.

We should remember that the City Council itself, with admittedly questionable motivation, chose the route.

It’s fair to fault rail officials for their defective budgeting, but they were given the route. The City Council and current and former mayors share also in the responsibility for their support of a questionable decison-making process. Whatever mess we may find ourselves in now or in the future, it was not caused solely by the current managers of the project.


“
The decision [on a rail route] capped a wild week of political maneuvering as supporters of other paths scrambled for votes, and angry constituents bombarded council members with phone calls and e-mails.
” 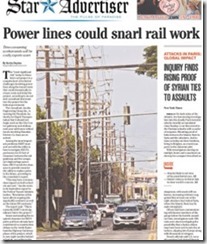 Here is the Star-Advertiser front page article (11/16/2015) that prompted my post that same day.

The headline is “Power lines could snarl rail work.” Yes, but that should not have been news in late 2015.So perhaps rail officials should resign. That won’t, however, solve the problem, unless the route is cut short or re-routed. And who knows how much an unplanned re-route would cost. Whoever might replace current rail officials will be stuck in the exact same mess as current leadership.

Read Dillingham power lines are and were a known obstacle that Rail would have to deal with for a recap of earlier City Council discussions on the rail route and keep in mind that then, as now, our elected leaders were bankrolled by those who profit from rail and development (see: Op-Ed: Honolulu City Council Revote on Rail a Mockery, 10/14/2015).