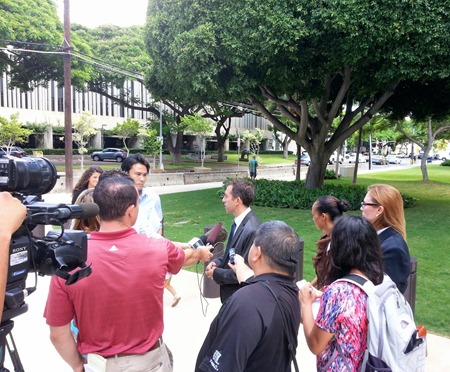 ACLU Legal Director Daniel Gluck is debriefed by the media after today’s hearing at the federal courthouse.

Behind him is lead plaintiff Tabatha Martin.

To paraphrase Japan Emperor Hirohito’s broadcast surrender speech, “the motion for preliminary injunction filed in federal court has developed not necessarily to the advantage of the Kakaako homeless community.”

Challenge to the commercial media

Instead of just reporting what one side said and then the other, and then going on to sports and the weather, how about reading the motion for TRO and the City’s response and then going out and learning who is telling the truth and who is lying?

To make it easier for you, I have posted the key documents in a Dropbox folder here. The motion for a TRO is #12-0 and the opposition motion is 16-0. Note that the link may stop working eventually. You can download your own copies to read at your leisure. Please consider all of the documents to be unofficial and do not rely on them. If you really need one, you can get an official copy from the court.

Then if you hit the streets and speak to people, I’m sure you’ll find out whether or not people’s ID, medicines, etc., are actually being destroyed or not, for example. Check it out. Then let your readers or viewers know.

Judge Helen Gillmor’s ruling today fits comfortably in a nutshell: plaintiffs said one thing, defendants said exactly the opposite, and since the facts have not been established, the TRO cannot be granted.

ACLU Legal Director Daniel Gluck argued for the plaintiffs (lead plaintiff Tabatha Martin and her daughter were in the courtroom) and explained that the motion for a TRO was very narrowly focused on halting the unconstitutional actions of the City in Kakaako.

The City denied everything in a counter-motion filed just after 1:00 p.m. today. There was no meeting of the minds whatsoever that would have given the judge the opportunity to decide anything. Today’s arguments were turned into a he-said-she-said dialogue.

Here is a snip from the “table of contents” of the City’s motion in opposition:

A.    PLAINTIFFS ARE UNLIKELY TO SUCCEED ON
THE MERITS OF ANY OF THEIR CLAIMS AGAINST
THE CITY

B.    PLAINTIFFS DO NOT SUFFER IRREPARABLE HARM
IN THE ABSENCE OF INJUNCTIVE RELIEF

C.    THE BALANCE OF EQUITIES DECIDEDLY TIP IN
FAVOR OF THE CITY, NOT PLAINTIFFS

D.    INJUNCTIVE RELIEF THAT PLAINTIFFS SEEK IS
NOT IN THE PUBLIC INTEREST

So they deny everything in screaming caps.

A tentative date of December 14 was set for a formal hearing on the TRO.

Meanwhile, back in Kakaako, the City continues its raids and property seizure.

By December I suspect the area will be spick-and-span, with everyone cleaned out. I wonder what the point of a narrowly-focused TRO will be after its all over. In December, what will they be arguing should be stopped?

This is not “disappeared news” so check the TV tonight for more details. I get to end this here, kick back with an espresso, and wait for the 6 p.m. news.

To quote the American singer, songwriter and actress Jo Jo, “You know it's just too little too late.”

So much ignorance and meanness in this town. Shame on the lot of 'em; those who who run over us in their fine carriages and never look back to see what the bump was,