Courthouse News Service: Fight Is on to Save Hawaiian Bird Endangered by Development


“
The Oahu Elepaio, a member of the monarch flycatcher family, is a small, insect-eating bird weighing in at about 12 grams - less than ½ an ounce. It has a dark brown crown and back, white breast with light brown streaks and usually holds its long, tipped tail at an angle.

Native Hawaiian canoe makers viewed it as a guardian spirit that would tell them if a canoe was made of good wood or bad, by either pecking at it or landing on it and singing.
” 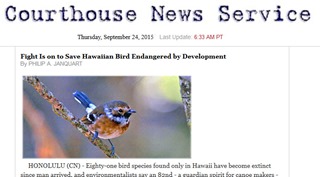 What? An article about saving an endangered species by Courthouse News Service? Yes, there is a lawsuit involved.

The article has background on this bird and others, including some of the history of extinctions in Hawaii.  It’s a quick read. Well written. Just the right length. Fight Is on to Save Hawaiian Bird Endangered by Development