No “Plan B?” What about Honolulu’s “Housing First” program?

In reality, the RFP put out for the City’s “Housing First” program confirms that it is not designed to assist people into permanent housing. It is all about “Plan A”, which is simply to clear the riff-raff off the streets.

Here is the very first objective of the program (p. 15 of the RFP):

To alleviate the impacts of unsheltered homelessness on residents, businesses, and visitors in the City and County of Honolulu through the creation of appropriate housing opportunities that will facilitate the transition of unsheltered homeless persons and families from public and private property not meant for human habitation in targeted neighborhoods, to appropriate housing in the community.

Unsaid is that there is no “appropriate housing in the community” available, even as the sweeps are escalating. It’s all about “alleviating” those impacts, primarily on Waikiki businesses, without dealing with the underlying housing crisis.

For more, click the link above to a September 2014 article.

A hearing on a motion for a temporary restraining order against the City’s sweeps of homeless encampments has been set for today (Tuesday, 9/22/2015) at 2:30 p.m. before Judge Helen Gillmor at the federal courthouse on Ala Moana Boulevard (if you are planning to attend, get there early because of the delay passing through security).

Most likely the argument will be made by ACLU Hawaii’s legal director Daniel Gluck, but there are also two attorneys from Alston Hunt representing the plaintiffs.

Plaintiffs allege in the complaint that the administration has been accelerating the sweeps, and so injunctive relief is urgently needed.

Why would the Mayor accelerate the sweeps? Because sweeping the houseless off of the streets of Waikiki and now out of Kakaako where they have been forced to concentrate is the City’s Plan A—and they have no plan B (see box).

If Judge Gillmor grants the injunction in full, it could leave the City’s plans to rid the streets of tent encampments in disarray.

Is the Mayor accelerating the sweeps? A small snip (edited) from material supporting the motion for a TRO:

A Temporary Restraining Order is needed to prevent imminent harm to Plaintiffs. Additional sweeps were announced on Friday, September 18, 2105, and are taking place rapidly, with more scheduled for Monday September 21, 2105 and Tuesday, September 22, 2015. The City has made clear through its repeated acts, which have only escalated since this case was filed on September 16, 2015, that the seizure and destruction of class members’ property is part of an ongoing campaign of unconstitutional government action in the City and County of Honolulu. One news report on September 17, 2015, described the destruction of a putative class member's shelter as his father was undergoing a triple bypass. Unless restrained by an Order of this Court, these unlawful acts will continue.

From the motion (edited):

This Application for Temporary Restraining Order and Motion for Preliminary Injunction was not filed contemporaneously with the Complaint because Plaintiffs first attempted to negotiate immediate relief to avoid the need for a TRO, and because the City has escalated its enforcement actions since Plaintiffs filed the instant action.

Specifically: (1) shortly after filing the Complaint, Plaintiffs proposed a good-faith settlement and stipulation regarding these issues to the City to attempt to moot the need for injunctive relief; but (2) on Thursday, September 17 – after Plaintiffs' filing of the Complaint, and despite a call by Plaintiffs' counsel on the day of filing inviting a stipulation related to ongoing enforcement – the City seized and immediately destroyed property belonging to members of the putative plaintiff class; and then, (3) on Friday, September 18, the City announced that it would escalate enforcement with plans to conduct back-to-back unconstitutional sweeps on September 21, 2015 and September 22, 2015.

What is a preliminary injunction?

(Originally posted in this article)

Although district judges have great discretion in determining whether to issue a preliminary injunction or not, there are standards of review that apply within each circuit.

I’m not an attorney, but my understanding is that the court will apply a four-prong test that goes something like this:  (1) Plaintiffs have to show that they will likely succeed on the merits, (2) that they will suffer irreparable harm in the absence of preliminary relief, (3) that the balance of equities tips in their favor, and (4) that the public interest would not be adversely affected by an injunction (alternatively, that an injunction would be in the public interest).

Injunctive relief is not routine. It is an extraordinary remedy granted only when the plaintiff has made a clear showing that such relief is necessary. This requires not only evidence convincing to a judge but expert presentation on the part of the attorney. But again: the merits of the case have not been tried at this point. Injunctive relief, if it is granted, is only the first step in a longer process. In our system of justice, with overloaded courts, a trial on the merits of a case could stretch out for years.

The instant Motion requests very narrow relief: Plaintiffs ask the Court for an order that: (1) prohibits the City from seizing and immediately destroying their property, absent an immediate threat to public safety from storing the property; (2) requires the City to provide a post-deprivation process whereby indigent individuals may retrieve their property without paying a $200.00 penalty, within twenty-four hours, and without having to travel to multiple offices around the island of Oahu; and (3) other protections as outlined in the Application.

Readers of Disappeared News have read that it is practically impossible for those whose property has been seized to retrieve it. Many I have spoken to were told that they had to pay $200, which they do not have, and go to some remote part of the island to get back their things which may have a value of considerably less than $200. They are not told that the fee may be waived. They do say that in many instances, even if they comply with the requirements, they are unable to retrieve their possessions.

Also significant is that what the City illegally seizes and destroys in a garbage truck compactor can never be retrieved. 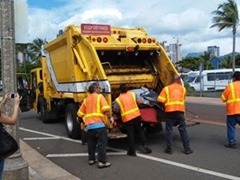 Our commercial media have mostly reported the official line, as spouted by the City—for example, testimony to the City Council, that in fact the possessions can be retrieved. Reporters have not questioned the veracity of this testimony even though it has been challenged by advocates and houseless individuals themselves. Nor have City Council members questioned the City about how it carries out its raids in practice.

Let’s see how the media report this lawsuit, and especially, if Judge Gillmor rules in favor of the plaintiffs’ injunction, how they deal with their own inattention to the facts on the ground.