As usual, I start my Sunday morning with David Shapiro’s column, a double espresso, and the Sunday comics. From there, it’s a tossup as to how I’ll feel after reading the rest of the news and editorials.

Today was mixed—which is actually positive, considering. Shapiro is spot-on in observing the lack of progress on the part of the Governor on the homelessness crisis now shoved in government’s face.

The editorial actually mentions “Housing First,” so they’ve revealed that they are actually aware of the concept. It’s a beginning.

Over in the Money section is an article reporting the steep increase in rents, It actually mentions that this will have an effect on homelessness. Yes, the editors are getting closer to the heart of the crisis.

At the very end, the very bottom, of this article, the newspaper introduces a concept that we’ve pounded on over the years on this blog—that DOH service cuts contributed to homelessness (and worse, see video below) and must be reversed.

Dr. Virginia Pressler, the director of the state Health Department, considers behavioral health one of her top priorities at the department. Her hope is to rebuild mental health services that were sliced in 2009.

"It's an area that's been neglected for many years," she said in a recent interview with the Honolulu Star-Advertiser. "And I think with all the budget cuts a number of years ago, cutting community-based programs and things like that, we're paying the price big-time now. Because that's part of the homeless problem."

So welcome to the table, Star-Advertiser. Good beginning today.

It's astonishing that it's taken nearly eight months into his term for the governor to step forward on this humanitarian tragedy and potential economic disaster.

He kept holdover state homelessness coordinator Colin Kippen in interim limbo since December, then dismissed Kippen last week before starting a search for a permanent director.

Little was accomplished during that time and the lost opportunity was costly.

More on Governor Ige’s lack of attention after the box. There’s a link to a video. Jump down to the video if you don’t want to read all this detail.

What’s happening or not happening with the homelessness crisis, as revealed in today’s paper

Honolulu’s average rental rate of $2,675 was the second most expensive following $2,916 in the San Francisco-Oakland area.

High rents contribute to the growing homelessness problem on Oahu.

There is no action at all on rent control, rent stabilization, or the creation of tens of thousands of affordable housing units.

Predictably, people will be dumped out onto the streets as rents continue to exceed their ability to pay. Sky-high rents also hurt the economy though benefiting the development lobby that contributes to politicians’ campaigns.

So the homelessness crisis will deepen.

The Governor’s “Leadership Team on Homelessness” has been named, but it does not include a single expert on the subject and excludes Neighbor Island participation.

The state has not replaced the considerable expertise of its “homeless czar.” Shapiro noted:

The Neighbor Islands are certain to be left out because they’re not even at the table.

Also, the state will have to start from scratch on putting together a team that can actually get the work done. Even appointing a new homelessness coordinator expeditiously will not help if that person does not have experience and has not been engaged with the issue in Hawaii so far. One can hope for a good appointment, though.

So replacing expertise with a team made up of politicians may simply cause further delays and deepening of the crisis, or it might work, if resources can be found and put to use more quickly. It’s too early to tell what difference this new team will make.

Police, in cooperation with Queens Hospital, are providing mental health supports to those coming to their attention. This is described in an article in today’s paper.

The community services that used to be provided by the Department of Health Adult Mental Health Services have not been replaced.

In order for Housing First to succeed, many residents will require supports of various levels of intensity. Someone, probably the DOH, will have to contract for those supports. At present, both the city and state are in denial that they have to spend money on intensive support services.

There appears to be an expectation that existing social services will suffice. That’s contrary to experience elsewhere.

This will mean that many of the chronic homeless will be unable to remain in apartments long-term (even if there were any) and can be expected to cycle back to the streets or shelters.

The city has let contracts for its pet project, a small shelter on Sand Island.

Housing First is not happening. Budgeting money is good, but it must be spent. That means (for example) there must be people assigned, responsibilities defined, a timeline and plans drawn up, and money actually spent to create housing and services in adequate supply. None of this is happening. The City Council refused to fund the positions the Mayor requested to work on creating housing.

Specifically, [the Leadership Team] must find a way to pool resources in a way that’s rarely tried. For example, the city has money in its Housing First program and the state has hundreds of vacant units in its public housing complexes. The units could be used for the homeless now camped out in Kakaako, Kapalama and elsewhere, but they’re uninhabited because they’re in derelict condition.

Even if those public housing units could be put back into service soon, and even if the Sand Island facility were available today, the number of units altogether is so small that they will be only of some help. As rents increase while jobs do not provide even a living wage, the number of people living in poverty will continue to increase, and the growth of the number of homeless individuals and families can easily exceed the number of units proposed to be put on-line.

Even New York City Mayor Bill de Blasio will be challenged to produce the 200,000 affordable units he promises, but at least he has people actually working on it, and they already know how to control rents.

The prognosis for Hawaii? Government either comes to its senses or the crisis continues.

The city still plans to relocate the people camping in Kakaako.

Several things are not happening.

There seem to be no attorneys working to protect the civil liberties of those whose personal possessions (ID, medicines, etc.) have been illegally seized and disposed of by the city during the hundreds of sweeps. I’m not aware of any way that people can be forcibly relocated, so if the city uses its stored property law as it has, it will basically be violating people’s civil rights and harassing them until they choose to go elsewhere.

The Sand Island facility isn’t ready, yet the talk is that the forced relocation will take place in August. Even if Sand Island were ready the number of units is too small to even accommodate the campers in Kakaako.

Services that could help keep the peace in the area are not being tried. In more gentrified areas there are (for example) neighborhood patrols that involve volunteer residents in keeping the peace. It seems to be more convenient for the newspaper to hype the danger than to suggest solutions.

People should not have to live on the streets. Those in Kakaako have largely been forced there by state and city neglect and by city policies that have swept them out of other areas.

Clearing Kakaako will disperse the encampment into other neighborhoods. Nothing will have been done towards resolving the ongoing crisis.

This is a side show to implementing Housing First properly. It may cause some people to claim progress because they don’t have to deal with the sight or effects of people living in terrible conditions on the streets, but it solves nothing in the long or short runs.

Not in today’s paper but I want to sneak it in: The state actually cut funding for Kupuna Care this past legislative session, instead of increasing it as advocates requested.

Some seniors, without these modest supports, will predictably be unable to remain in their homes.

Senator David Ige in an unsupporting role in this video

While a state legislator, David Ige did not act to reverse damaging mental health cuts that resulted not only in homelessness but in avoidable deaths. Don’t miss the part at the end where the two legislators look at each other but take no action. 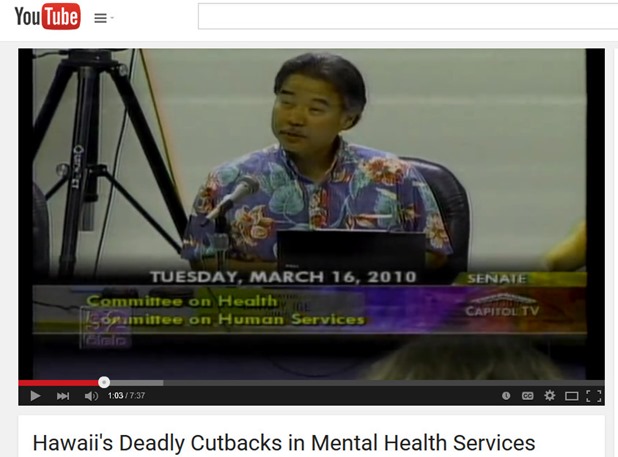 State senator David Ige was made aware at least by this sworn testimony taken in March 2010, that cuts to state mental health services had been devastating to those who depended upon them. 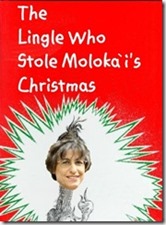 Related to these cuts were former Governor Lingle’s attempt to close the only source of state adult mental health services on Molokai, and prior to that, DOH head Bruce Anderson’s almost successful plan to close services at the Diamond Head center. Anderson claimed he wanted the space because computers needed for the Felix Consent decree were standing on the floor. Meetings of up to 300 or so people opposed the shutdowns, but it took an advocate who had Governor Cayetano’s phone number to contact him on his trip to California and get him to tell Anderson to lay off, which the governor did.

These cuts are costly. They increase homelessness, run up costs for emergency treatment, and result in deaths.

Among the adult services cut were the ACT contracts, which supported people trying to remain in their apartments. It is exactly those services that will need to be replaced if Housing First is to be successful for a substantial number of the chronic homeless.