The cost of electricity in Hawaii is still about three times the national average. It’s one of those records that never seems to change, like pedestrian deaths or cost of living, etc.

Putting solar panels on one’s roof is a good solution, but some of us can’t do that. We’re stuck with power from the grid. Now, if only there were cheap solar power being put onto the grid in sufficient quantity to make a difference… it will happen one day.

Just as the so-called “big box” stores save Hawaii consumers from ripoff grocery prices, they might also contribute some solar power to our grid one day. I’m suggesting nothing less than “big box electricity.”

Have a look at all the real estate that Costco Iwilei uses for parking, for example: 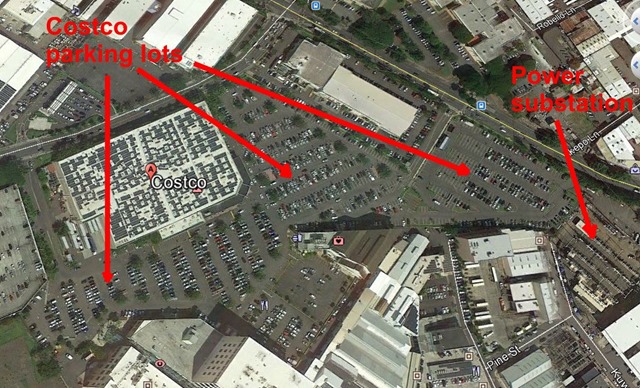 Suppose those parking stalls (and perhaps the waiting lines at the nearby Costco gas station) were covered over with solar panels!

And look: there’s a HECO substation right next door, ready to receive the bounty of low-cost energy those panels could produce.

Costco warehouses are surrounded by acres of parking lots, all exposed to the Hawaii sun. Think of the watts they could produce.

This is not a far-fetched idea. Not to far from the Iwilei location is a small shopping mall at the corner of Vineyard Boulevard and Liliha Avenue that has already embraced this idea. Much of their parking space is roofed over with solar panels that create shade for the cars (and certainly appreciated comfort for drivers and passengers) while making electricity.

Here are some images snapped of their installation. Click any of them for larger. 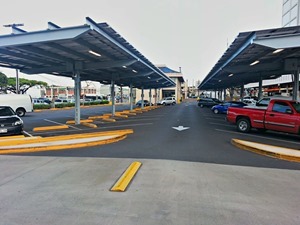 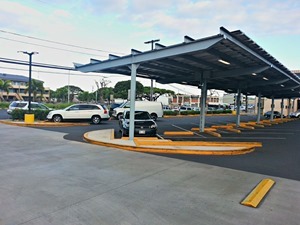 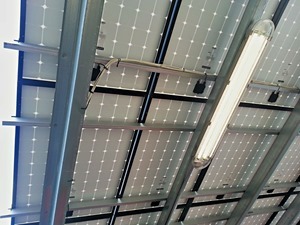 In my earlier article (linked above) I suggested that when making shade, make electricity. Now I would also suggest, make both shade and electricity. The detail above suggests that there’s not much to it. Of course, I wonder how these panels would fare in a hurricane. We might find out one day. To be honest, I suspect that this installation could run into trouble.

And yes, I did send the top picture to Costco, not expecting a reply, and I didn’t get one. Maybe now that I’ve taken these extra pics I should send them along also.

Imagine every Costco parking lot in Hawaii covered with solar panels. The same would apply to large shopping malls where there is not too much tree cover. Or how about the roof level of parking structures or exposed street-level parking such at UH?

If you’re at Costco and think of it, how about filling out a suggestion form at the door—ask them to make electricity and give drivers some shade at the same time!