Below are some snips from Twitter and news sources on Syria and ISIS. Even if you are not interested right now in details, try skimming through the headlines below to see what has been disappeared from your daily news. There are lots of images, no need to read if you don’t want to.

I’m not sure that newspaper readers here understand that they’re getting only a tiny morsel of international news, and even that much has been trimmed and filtered so that it misleads. Often enough, it is the official government line that appears in the truncated stories in the center of the first section of your daily paper.

Here’s a preview, showing why it’s hard to be informed when we’re fed only scraps of information: 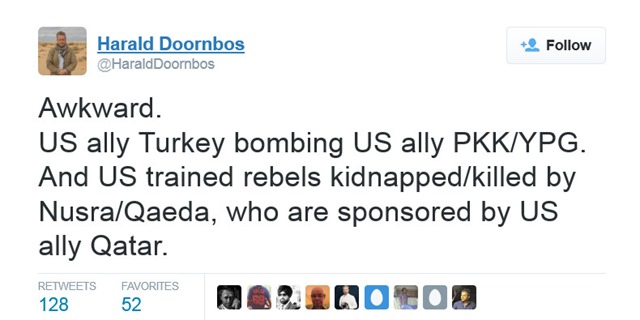 No “Silver lining” in failure of US training of Syrian troops

Today’s article on Syria is a great example. After reading, you’d know that US-trained forces were unexpectedly attacked, an “intelligence failure,” but that there is a silver lining.

No there isn’t. Nor is the failure only of intelligence, at least in the military usage of the word. In fact, the US strategy of training fighters in Syria is falling flat, according to reports that are readily available elsewhere (that is, not in your daily paper). 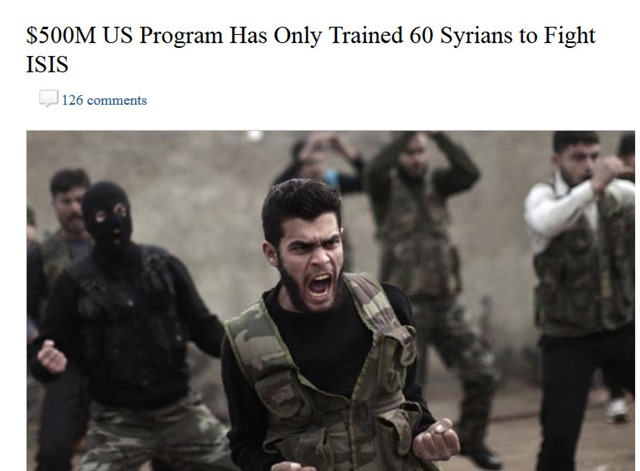 As to military “intelligence”: 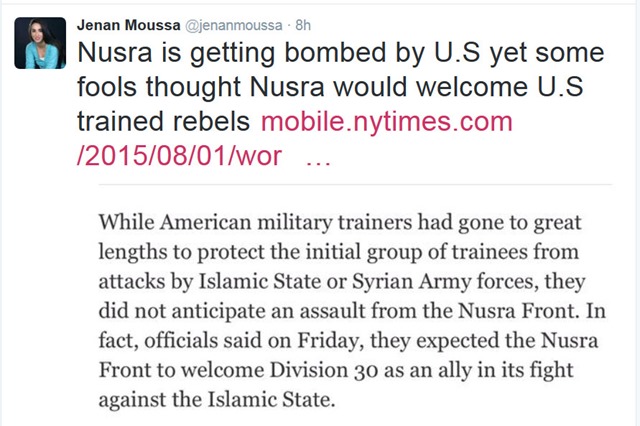 I haven’t followed the news from Syria closely enough to know if these are isolated reports. It appears that there are others, similar. In other words, we trained these troops at great expense, but we’re not getting results from that. It isn’t working.

You may also have read that Turkey has opened its air bases to the US. Well, yes and no. For example, see: US, Turkey Differ Over How to Fight IS From Incirlik Air Base (VOA, 7/30/2015).  Apparently, the US wanted to use this base to support Kurdish forces fighting ISIS. That has been nixed by Turkey. More:

The airbase “can be used at any moment when considered necessary” by coalition jets, but “support for the YPG is not one of the elements of the agreement,” Bilgiç said in comments carried by Hürriyet.

This contradicts earlier comments from Washington indicating it intends to use the base to support the YPG against ISIS in Syria.

US State Department Spokesperson John Kirby said US use of bases in Turkey would “allow air support to the YPG to be more timely and effective.”

Documents and flash drives seized during the Sayyaf raid reportedly revealed links "so clear" and "undeniable" between Turkey and ISIS "that they could end up having profound policy implications for the relationship between us and Ankara," senior Western official familiar with the captured intelligence told the Guardian.

NATO member Turkey has long been accused by experts, Kurds, and even Joe Biden of enabling ISIS by turning a blind eye to the vast smuggling networks of weapons and fighters during the ongoing Syrian war.

Finally on this, keep in mind that the Kurds are being killed with US-made weapons supplied to Turkey: 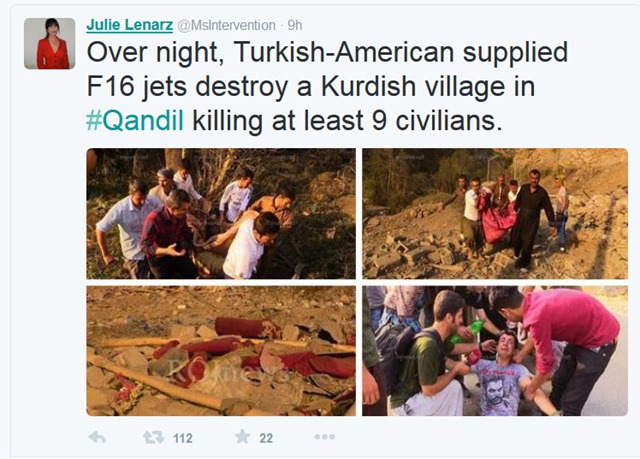 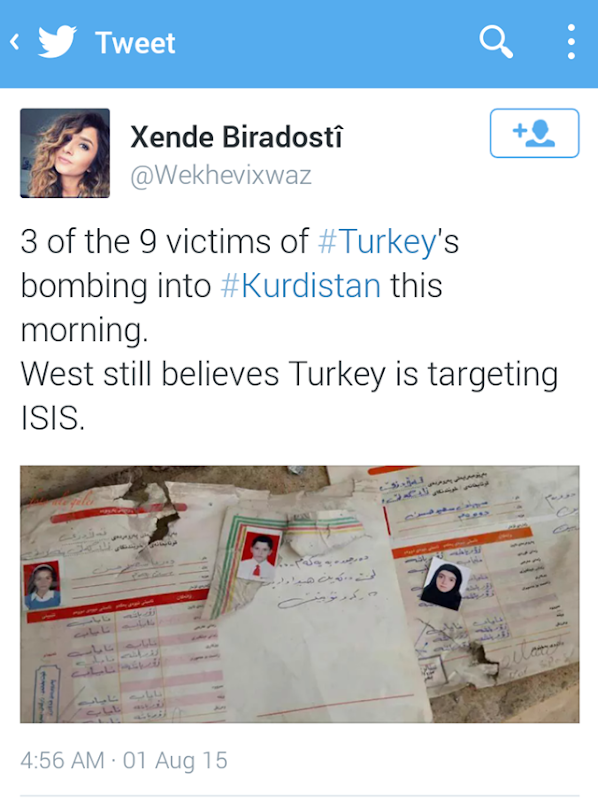 Try and unscramble all this from the few tiny international reports squeezed into our daily paper. Even with access to the world’s news organizations it’s difficult, but at least the reports are there if you want them.

Even early reports suggested that Turkey may have been supporting ISIS. Later reports appear definitive. 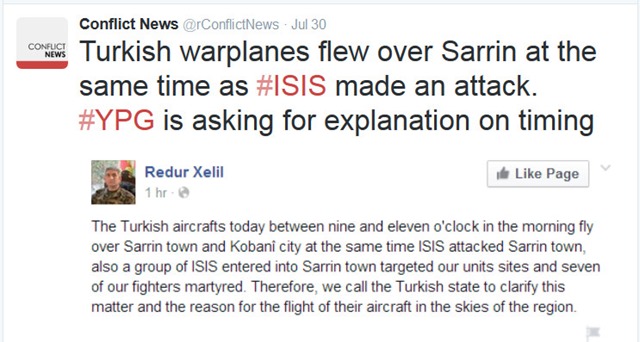 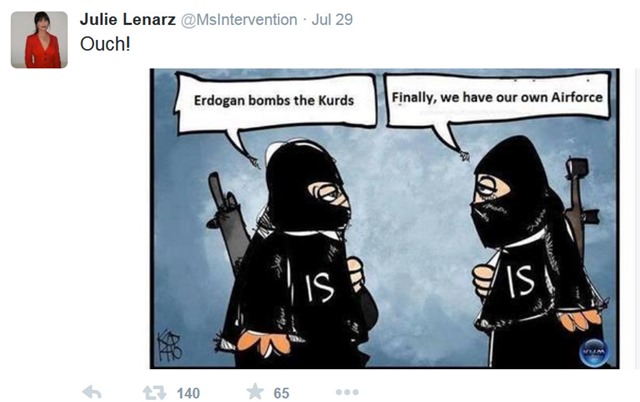 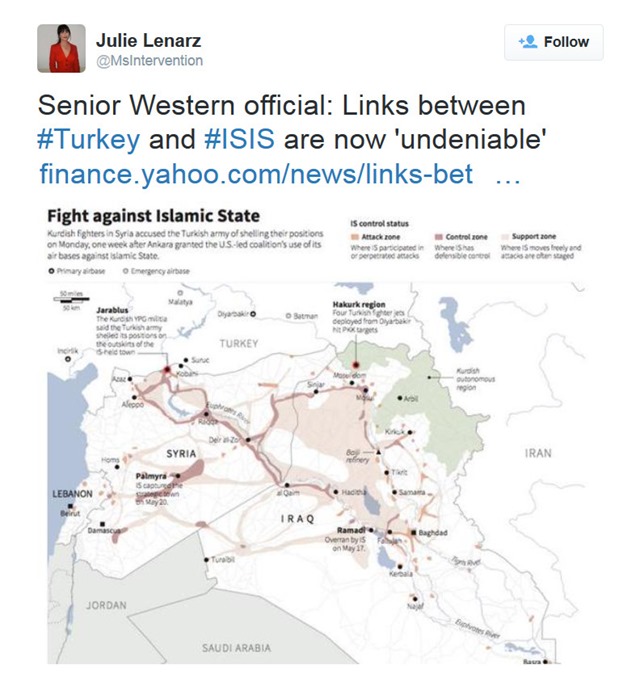 Bottom line here (if there ever is one): you learn little from little articles that are not current, complete, or have follow-up.

Elsewhere in Syria, while civilian deaths in Aleppo, one of the oldest continuously inhabited cities in the world; does occasionally break into the news, the full extent of civilian casualties does not. Obviously, this kind of data is important to know if one wants to assess the situation.

Note the firepower deployed, and that it is being used against civilians: 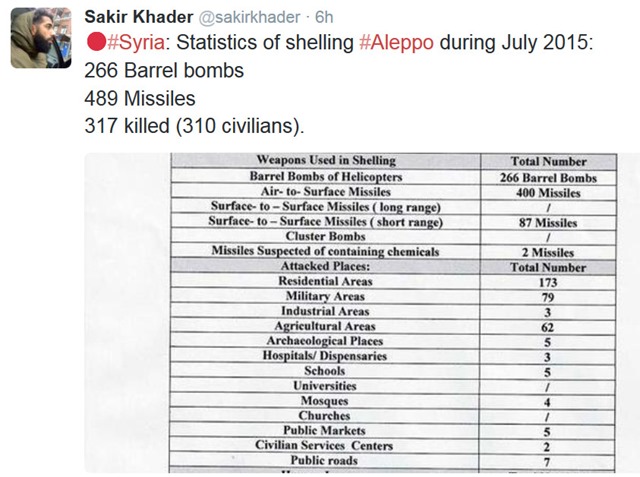 Here is the complete table: 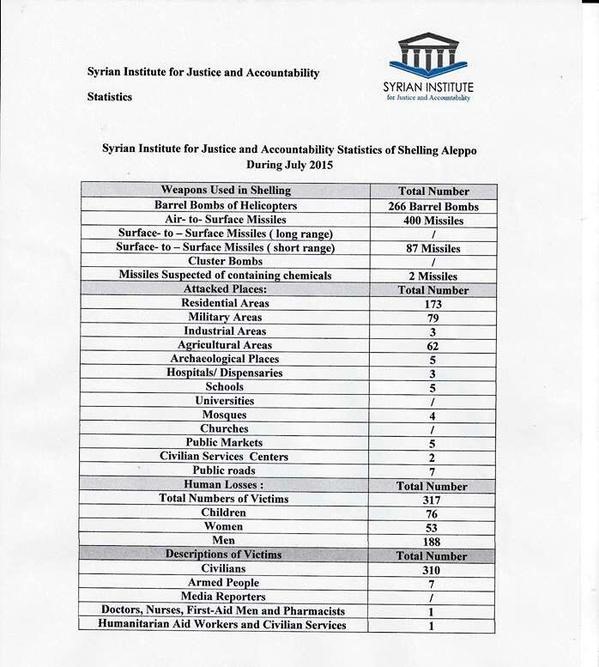 Progress against ISIS, or not?

There’s so much we are not told… how about this about ISIS. Are we making progress against them, as even the White House assures us? Maybe not so much: 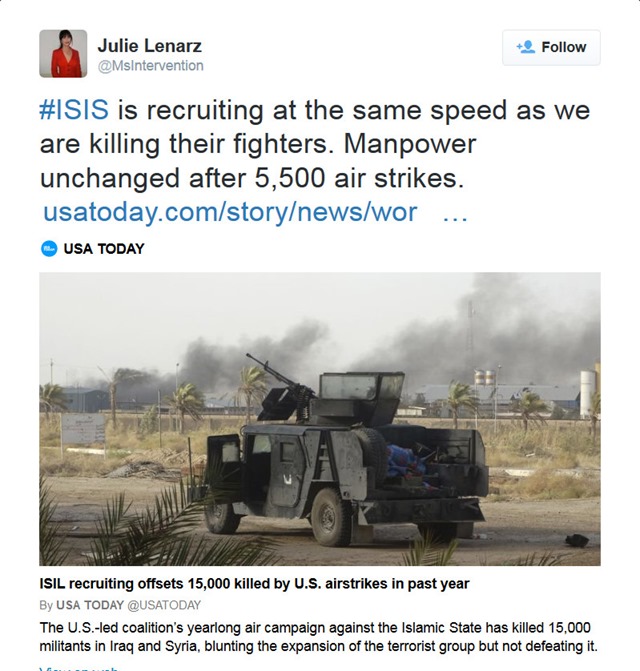 My intention is not to give a complete picture of how our efforts in Syria and the rest of the mid-East are going, I can’t do that. I just want to point out that small snapshots in the paper are very often misleading, almost always incomplete, and sometimes apparently biased toward the official line. If the editors think they are performing a service to readers, it just isn’t so.

In this Internet age, it’s better to get information from reliable news sources on-line.