Abercrombie’s “New Day” may come without him

On May 5, 2014, at the site of a construction project in Fort Greene, Brooklyn, New York City’s progressive new mayor Bill de Blasio sketched the outlines for his housing plan: 80,000 new low-cost homes, 120,000 more homes preserved. It would put Robert Moses and Michael Bloomberg to shame, dispatching construction cranes to the city’s every nook and cranny in the pursuit of affordable housing.—from an article actually critical of de Blasio’s plan. The Mayor shot back at critics.
”

We never did get that promised “New Day” during former Governor Neil Abercrombie’s reign, but Hawaii has a better chance to achieve it now that he’s gone.  It depends on how the current housing crisis is handled, and whether state leadership, both in and out of government, can turn that crisis into the proverbial opportunity.

New York City faces a similar crisis, but it is putting in place a hoped-

for solution. Mayor Bill de Blasio has promised 200,000 affordable apartments. His formula is 20 percent low-income, 30 percent middle-income, and 50 percent market-rate split. Also, NYC defines affordable as (per another article) 40% of area median income, which is considerably lower than Oahu’s definition.

Governor Ige’s new Leadership Team on Homelessness is composed entirely of virgins on this issue. No doubt they want to achieve something, and because of who they are, failure is not an option for them. So they will have to learn quickly, or their political careers may take a hit. Hysteria, also, is not an option, and so they will ultimately be pushed to do something which promises to work. But how far off will their enlightenment be?

The measure of success will be how effectively truly affordable housing can be created in numbers sufficient to meet the growing demand, and how well people can be supported to stay in their homes. This may also mean rent control or stabilization, and/or adjustment of the minimum wage. Or whatever it turns out to both provide homes and ensure that people can actually afford them.

All the Team has to do is get the process started and make sure the path is clear: the end will not be in sight for a decade or more.

Oh, they will also have to give up the lies and the hype, such as using an unworkable definition of “affordable housing” as their working goal. And they might as well learn to Google “Housing First” so as to erase their misconceptions.

Abercrombie could not have done it. He had already sold out to development interests. The public fought him, successfully killing the PLDC, for example. We clearly preferred to keep public lands in our public hands. Affordable housing did not appear on his radar.

Ige (and his team) can put together a program of change for Hawaii that Abercrombie couldn’t imagine. Why? Abercrombie was misusing capitalism by pushing development only for the profit of developers. We’re still stuck with that model, and it needs to be retired. 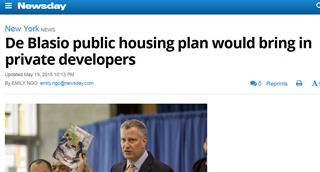 The great leap we can and will have to achieve is to harness capitalism to literally re-do the landscape of Oahu. That’s what New York City is doing.

In order to solve the current housing crisis we will have to conduct a really big makeover of the entire island. That will be capitalism at its best, doing what it does best. At the same time, we need to control the process by stopping capitalism from doing its worst: catering only to the ultra-rich and paying into politician’s campaign treasuries.

Capitalism is by nature selfish. We need to let it be selfish while it works on behalf of others. De Blasio has got that, we need to get it also. There is nothing new about this.

Building condos for the ultra-rich is counter-productive. It is old-think. Putting in 10,000, 25,000, or 60,000 new housing units is new-think. Paving over prime agricultural land is also old-think. We need both homes and affordable food, plus the jobs that local agriculture brings. A buck spent for a local eggplant stays in the economy, plus there is more to quality of life than just condos. Farms, parks and open space are important to quality of life. Housing needs to co-exist with, not replace, agriculture and natural spaces.

Those homes will not be micro-units or “auxiliary dwelling units.” What people want, and what is profitable to construct, are apartments or homes that will be filled with individuals and families able to afford them, paying rent and driving the gears of capitalism. The only acceptable outcome is one that stimulates this new growth in homes and in jobs that can pay for them. On Oahu, some of those homes are already “auxiliary dwelling units” because the city has proven unable to regulate so-called “ohana” dwellings, which are going at market rate. So there will be some of those too.

No one says this path is easy, but the alternative is… what? A viable economy requires that people live in homes they can afford and pay for them with wages that are sufficient to support life. If the Leadership Team feels their job is only to sweep the streets of Kakaako, they still have a lot of learning ahead of them.

Economic reform won’t happen without government leadership, because it really is a new direction. Business does not create jobs as much as it consumes workers. Government creates jobs, directly or indirectly through public policy. Capitalism in the classic sense provides the energy that runs the machine, but government must make it profitable to construct that machine. Public policy must startle complacent developers into building that “new day” out of their bricks, their mortar, and their union labor.

The problem is, we need a big-picture view, whether mine or someone else’s. Putting together a Lego village on Sand Island saves nothing – as many people as it will hold will become newly homeless across the island before it is even built. Check out the annual increase in the official numbers. The crisis is not one of temporary housing, it is one of permanent housing.

So we have an inexperienced team “in charge” but charged for the moment only with clearing the streets. Without Housing First, they won’t make much progress, and Oahu’s crisis will become their personal crises. They will have to discover the mechanism that will work. Stuffing as many people as they can into temporary shelters is not likely to work, and that scheme also fails to harness the mighty powers I am talking about.

If I am over-optimistic that they will learn, still, someone else will discover how to harness the power and ingenuity of capitalism and the passion for success that drives it. Hawaii, in the future, can still become a comfortable place for its people to live, work and play.

Affordable housing is part of the bedrock of what makes New York City work. It's what underpins the economically diverse neighborhoods New Yorkers want to live in. It's critical to providing financial stability for working families, helping them get ahead and build a better life.

Mahalo for this admirable write Larry; wish I'd written this.