“
Homeless shelters, Doherty said, should be thought of as “short-term intervention,” adding, “Sheltering people does not end their homelessness. If you think shelter is an endpoint, we’re not creating the solutions that people really need.”

The long-term answer is creating more Housing First options that put homeless people — even those with substance abuse or mental health problems — into homes where they will be surrounded by social service assistance.—Matthew Doherty, Executive director, U.S. Interagency Council on Homelessness, quoted in Star-Advertiser story
”

Once again it takes the Federal Government to intervene and correct Hawaii’s wayward social policy. In this instance, it took the executive director of an independent federal agency to push for a Housing First solution to Hawaii’s long-neglected homelessness crisis—and to force the Star-Advertiser to actually print the words “Housing First” in a news article. Matthew Doherty, Executive director of the U.S. Interagency Council on Homelessness, used the term and so the paper had to report it.

War on the homeless?

The New York Times is widely criticized for its warmongering leading up to the Iraq invasion, and I think it’s fair to blame the Star-Advertiser for its war on the homeless. In today’s front-page lead story Kakaako in ‘crisis’ reporter Dan Nakaso yet again milks the assault on Representative Tom Brower, which has recently morphed in his articles into a “mob” action.

Homeless people as the enemy

This is the story (Star-Advertiser, 8/16/2015) in which the reporter mentions the assault on Tom Brower not once but twice, even though it has nothing to do with the theme of the story, which is the delivery of social services to those living in the Kakaako encampment. A good story spoiled three times. 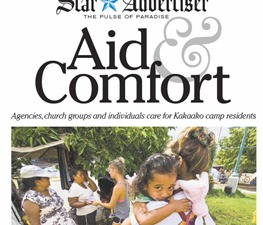 Three times? How so? Twice by the unnecessary (unless one has an agenda) mentions of the Brower incident, and something a bit more subtle, which had nothing to do with the article itself.

I couldn’t figure out what was bugging me about the headline. Later in the day it came to me while washing the dishes.

Treason against the United States, shall consist only in levying War against them, or in adhering to their Enemies, giving them Aid and Comfort.

That’s from Article III Section 3 of the US Constitution that establishes a definition of treason. It’s the most common context for the phrase “aid and comfort” according to Google (what would bloggers do without Google?).

Of course, the meaning of “comfort” has changed since then, but the phrase may have been chosen subliminally by the editors, if my theory that the newspaper is treating homeless people as the enemy has any validity.

So in the minds of the editors, are social service agencies giving aid and comfort to an enemy? Hmmm…

That attack is kind of the “aluminum tubes” for the S-A, something they can repeatedly parade before the public to fan the flames of war on Honolulu’s homeless. The paper advocates clearing the encampment without regard to the impact on the people or the communities into which they would be dispersed, and salivates editorially over the prospect of new sit-lie bans.

At the same time the newspaper has studiously avoided mentioning Housing First (as a Google search confirms) which is a solution that has worked elsewhere and saved taxpayers money. A lot of money.

While Housing First may save taxpayers money and greatly reduce homelessness, it is clearly not the “chamber of commerce” solution, so the paper’s attitude is explainable. That luxury condos are so often given lavish front-page spreads is the giveaway. Their front-page coverage is returned to them in expensive full-page ads paid for by the developers.

It’s not just the news desk: the paper has editorially pushed overbuilding in Kakaako (e.g., Kakaako plan for 22 towers holds promise, 10/12/12) while itself ignoring the growing plight of the houseless over the years. Yes, 22 towers hold promise for lots of ad revenue. So there you have it.

Reporter Dan Nakaso actually mentioned the assault on Brower twice in a recent article (see sidebar). Nevermind that the articles would be just as good had he not exploited that incident at all.

Editorially, the paper got into a snit on July 19 because government leaders were not “jolted awake” as the result of the assault against Tom Brower. Never mind that crimes of all sorts take place in far greater numbers elsewhere. There’s crime in Kakaako, where people have been pushed together in unsatisfactory conditions by the city. There’s crime elsewhere, too, which the paper does not repeatedly remind us of.

At the same time, the editors are aware that while they cheerlead condos for the ultra-rich, the affordable housing deficit is growing without hope of a resolution in sight. On February 22, 2015 the paper ran a story, Shortage keeps growing, that admitted two key points: (1) the best case scenario was that the state would not meet its modest 2016 housing goals until 2029 the very earliest, and (2) the working definition of “affordable housing” at 140 percent of median income is an outrageous fiction.

WHAT IS AFFORDABLE HOUSING?

Affordable, or workforce, housing is broadly defined as rental or for-sale units priced for individuals or families who make less than 140 percent of the area median income, which is currently $134,140 for a family of four.

Not only those living on the streets, but most in the growing poverty sector, will not find the $134,140 for that kind of “affordable housing.” In previous articles I’ve noted that in NYC, Mayor Bill de Blasio is working with a definition of 40%, not 140%. They also have a plan for 200,000 homes that they might meet, even as we flounder here in Honolulu. And we keep planning to build shelters. Shelters don’t replace a solid plan for affordable homes. Plan shelters, but also plan for the necessary truly affordable housing, which will be needed in perpetuity.

Worse, as you’ll see below, the state has been contributing to the housing crisis since about 1995.

There is some hope perhaps. For example, in today’s article they acknowledge that the growth in the Kakaako encampment was caused by the city itself:

The encampment expanded rapidly over the last several months, in part due to the city’s “sit-lie” ban, which continues to force homeless people out of Waikiki, downtown and Chinatown.

This is a baby step forward, because first of all, it is obvious, and second of all, they have been cheerleaders for the city’s actions while ignoring its inaction and the consequences of both.

As to ‘crisis’ in single quotes, it is a crisis, period. In fact, homelessness here has been recognized as a crisis in their predecessor newspaper since at least 2003. See, just as an example, this article by Rob Perez:

The state's repeated, multimillion-dollar raids of affordable housing funds to balance the budget, its failure to get tenants into scores of empty public housing apartments on a timely basis and its accumulation of an unusually high percentage of vacant units have contributed — some say substantially — to Hawai'i's growing homeless crisis.

There’s so much in that article that I urge you to read it. Now.

Many of the more recent homeless ended up on the beaches because they couldn't afford escalating rents, a problem exacerbated by the state's severe shortage of affordable homes.

Yet since 1995, the state has diverted roughly $212 million from funds designed to stimulate the building of affordable rentals and for-sale homes to assist income-eligible families with down payments for their first homes, and to underwrite other programs meant to address Hawai'i's housing-affordability crunch.

I wish I could reproduce the whole article here. Ok, one more snip, and remember, this is from 2006:

"It's been devastating," said Terry Brooks, president of Housing Solutions Inc., a nonprofit developer and operator of homeless shelters and low-income housing. "Look where we've ended up."

Where Hawai'i has ended up is with a high-profile social crisis that is as complex as it is widespread and that increasingly has attracted national attention.

All the editors of the Star-Advertiser would have to do is look through their morgue, there are good stories dying to be read in there. Then take off the single quotes from ‘crisis’ and begin reporting the news properly.

So we need Housing First, right?

So now the phrase “Housing First” has been forced into the paper. Will they explain it to readers, including a timeline of how well it worked in other cities? Will the paper turn around and properly accuse our state and city leadership of negligence all these many years by not implementing a Housing First policy?

Although I wish they would do it.

Reporting the news properly includes describing the success of other cities as they deploy Housing First strategies and the failure of Honolulu to do so. Please also report what ignoring Housing First will cost the city, if one must make an economic as well as a moral argument.