The “problem” in Kakaako is the city’s failure to deal with homelessness, housing and poverty 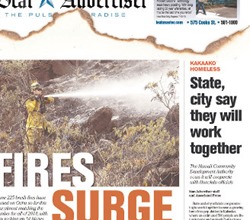 How wonderful! The city and state say they will work together, according to today’s curious headline in the Star-Advertiser.

On what—what are they up to now? As a general statement, this headline lacks credibility.

The article is based on an AP story that is headlined elsewhere “Growing Honolulu homeless tent city sparks talk about possible solutions.”

The mayor’s attitude is a healthy one: “We should all be able to call New York home.” Contrast this with the exodus Hawaii is experiencing because the state is becoming increasingly unaffordable to many.

To read more or to download your own copy of the New York City plan, click the link above.

The article does not mention “Housing First,” poverty, or the lack of any plans (city or state) to bring truly affordable housing on-line in the numbers needed to remediate homelessness in Honolulu. Contrast Honolulu’s approach with that of New York City, another municipality facing a crisis in homelessness (see sidebar).

“Empathy” is an inadequate remedy

I find it strange that when faced with a problem that has a cure, a doctor would prescribe only “tsk, tsk” for the patient:

"We are not lacking in empathy for the homeless, however our patience is exhausted after many years of trying to fix it and watching this problem escalate in Kakaako," Hinshaw said.

Sure, the problems that come with large numbers of people forced to live in a small area on the streets are growing. Dr. Hinshaw could have made a difference by identifying the antagonists of this “problem”—that is, what is the agent causing her discomfort?” At least from the story, it’s not clear that Dr. Hinshaw has done anything effective to “fix it.”

Continuing on in the AP or the S-A story:

Tabitha Martin, who has lived in the Kakaako encampment for two years with her husband and three-year-old daughter, said the camp has grown rapidly in recent months since the city began sweeps in other parts of Honolulu as part of its bans on sitting and lying down in Waikiki and other areas.

Certainly, the city and/or state could have made facilities available in Kakaako to ease the situation (showers, toilets, etc.) but what the city really wants to do is to scoop everyone up and dump some of them on Sand Island, leaving the rest to wander on their own. So we can expect some band-aid “solutions” such as old city buses turned into shelter for a few, but nothing in terms of solving Honolulu’s chronic affordable housing shortage.

The Council members want the state and city to settle jurisdictional issues so that the city “could be more pro-active” in enforcing sidewalk, camping and parking laws in the area, Martin said.

The Sand Island site is not designed to house families or the number of people that reside on the sidewalks of Honolulu. So if the city disperses the Kakaako encampment, where will people go? Where but into other neighborhoods. See: Kakaako as an example of economic segregation in Hawaii (7/2/2015).

No doubt that would make Dr. Hinshaw very happy. The Mayor and City Council too.