But that’s what the Star-Advertiser has just done.

Reporter Dan Nakaso closed his article in today’s paper by double-checking with Brower on shelter rules. For out-of-town readers, Brower is that state lawmaker-vigilante who went into Waikiki with a sledgehammer, attracting national and international attention of the wrong kind for Hawaii. His “insight,” ease and then tighten the rules, is first of all, off-base.

But then, here is someone who holds that

Solving the broad picture of homelessness is much easier than we're making it out to be.

Sure. But Trump offered his wall as the easy solution, so far Brower has yet to propose his plan.

Check how many times the paper has referred to Brower in recent articles. They constantly mention his unfortunate assault while doing who knows what on a venture into Kakaako’s growing tent encampment. They are milking that one incident as though it can possibly overshadow the human crisis that they have ignored for pretty much an entire decade.

In contrast, a quick check via Google did not find any mention on the staradvertiser.com website of the phrase “Housing First” since March 22, 2015. If the search is accurate, the paper has abandoned discussion of the evidence-based approach that is most likely to succeed in reducing Honolulu’s growing homeless crisis.

The rest of the story provides only partial information and so misleads. Yes, “no pets” rules keep many people out of shelters, but there is a litany of other rules imposed by IHS and other operators that have been cited in testimony and by individuals who have themselves experienced homelessness (for example at a recent “housing summit”) including, of course, the need to be clean and sober, the forced sequestration of private funds in a required savings bank account, payments, limits on length of stay, and so forth.

There are rules that either keep people out of shelters or result in their eviction or barring from shelters, according to these various reports. IHS seems to be as much into behavior modification as it is into providing safe shelter, and while the value of this might be debated, the first thing in an article such as this would be to accurately describe the rules that keep people out of shelters.

The paper needs to get up to speed rapidly on Honolulu’s many shelter issues and learn more about why people remain on the streets.

The paper has also let the city off the hook on its claim, made by former City Managing Director Ember Shinn in testimony to the City Council, that Honolulu is “in the vanguard of Housing First programs” nationally. The exact opposite is true. Honolulu is on a spending spree to open temporary shelters, and that money could, of course, go instead to a more permanent solution.

As to the state, their housing czar, who has championed and educated policymakers on the importance of a permanent housing solution, is out the door (literally) tomorrow. Today is his last day of work, and no replacement has been announced (Tom Brower??). 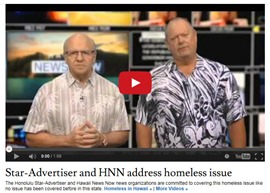 So I don’t think I have much faith that the two guys pictured on the Star-Advertiser web page are exactly the ones we should count on to “address homeless issues.”

If today’s article is an example of what to expect, I’ll stick to Civil Beat.

Anybody can improve and educate themselves, but not, I suggest, by consulting with Tom Brower on homeless policy.