New York City is working to eliminate roadway fatalities, Honolulu is not


“
Re-engineering dangerous roadways is a key pillar of Mayor de Blasio’s Vision Zero initiative to eliminate roadway fatalities, alongside traffic enforcement and education. Queens Boulevard is one of four major corridors being redesigned for safety under the $250 million Great Streets initiative funded in this year’s budget, in addition to 50 priority intersections and streets overhauled for safety each year by the DOT.—NYC Mayor’s office announcement, 7/23/2015
” 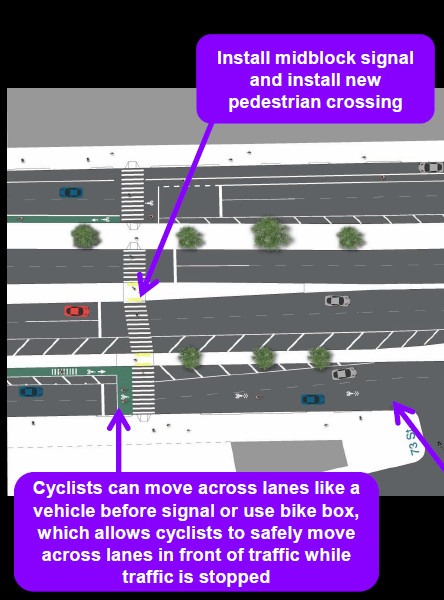 New York City has its problem streets. Queens Boulevard, for example, has apparently been labeled “Boulevard of Death” due to the large number of pedestrian deaths and injuries year after year.

Unlike Honolulu, though, it seems that the current administration in NYC actually values human life. Mayor De Blasio announced that $100 million will be spent to transform that one street into the “Boulevard of Life,” which will have “safer crossings, pedestrian refuges, more crosswalks, and protected bike lanes.” The project is called Vision Zero.

In its first year of operation, Vision Zero resulted in the safest [year] for pedestrians since record-keeping began in 1910, and 2015 is shaping up to be even safer.

Honolulu has its own “boulevards of death.” I would nominate S. King Street, Pali Highway, and Farrington Highway, to start.

Each year we set a national record for senior pedestrian deaths. We allow dangerous crosswalks to remain unprotected. The newspaper doesn’t even report the number of injuries or crashes, just deaths.

Queens Boulevard is extremely complicated and the large investment is justified. Our problems are simpler. It would not take much to reduce the slaughter, but that little bit isn’t being done.

Looking at the snip from the NYC plan above, it includes (at that one particular spot) a new crosswalk and signal. Also note the “bike box.” When we lived in Tokyo we noticed that intersections were striped with a space ahead of the stop line for cars. Bikes, mopeds and motorcycles could move forward into that box. They could use it to move across lanes, for example, as might be needed to make a turn. When the light turned green, the motorcycles took off and didn’t compete with cars at all. It appeared to be a great safety factor. The motorcycles start quickly and were way ahead of cars and in the clear until the next stoplight. We could use that idea! If NYC is doing it, we could too.

On S. King Street, after a series of crosswalks which have the day-glo signs, there are crosswalks with no signs at all. It would not take $100 million to put up those signs and help protect pedestrians. It would be pocket change for our DOT.

But they haven’t done it.

Note in the pull-quote that the plan includes “traffic enforcement.” We don’t do that in Honolulu. It’s clear that police do not assign any priority to enforcing the traffic laws, with the result that drivers run red lights blatantly and routinely, seldom stop before turning right on red, and even pull unsafe tricks such as turning from center lanes.

Pedestrians should not have to risk their lives because the city and state won’t make the necessary investments for basic pedestrian safety.

New York is fixing its safety problems. Incidentally, they are working on creating affordable housing as well.

Why are we so complacent here? Unless we squeak up, nothing will change.