Death-trap crosswalk on S. King St. among those with no signage—shouldn’t city be responsible for deaths?

A Star-Advertiser story posted yesterday identified the crosswalk at which an 86-year-old pedestrian was killed as S. King Street near Poha Lane.  I flagged that crosswalk in a March 2 article as one not being marked with any signs at all.

The crosswalk, near Poha Lane, is photo #11 in my article, Human sacrifice in Hawaii--death trap crossings demonstrate failure to provide even the simplest protections (3/2/2015). 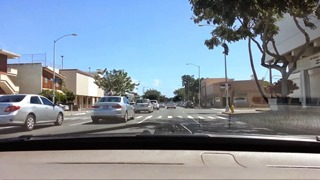 The photos were extracted from a video shot by my dash camera as I drove down S. King Street. They show intersections that have day-glo pedestrian crossing signs, one that has a blinking light over the roadway, and intersections with no signage at all to alert drivers.

The article, Pedestrian, 86, killed in moped accident is identified (Star-Advertiser, 7/6/2015) does not specify whether signs are present or missing.

The moped driver in this incident, or any driver for that matter, is more likely to look out for pedestrians if proper signage—or better, blinking lights—are provided, but S. King Street confuses by not having signs when drivers have come to expect them. That is, as one drives along, first there are signs, so the driver pays attention, but suddenly there are no signs. Lost attention can result in lost lives.

A paywalled article on the S-A website reported that the crosswalk is known to be hazardous:

Antoinette Keahiolalo, a security officer at McCully-Moiliili Public Library, described the crosswalk as “hostile” and said in the past six months she’s seen about five near collisions involving pedestrians in the crosswalk.

“I see pedestrians that are trying to cross that wait a long time,” she said. “Cars don’t stop.” When a motorist does stop, cars coming from behind “either speed around them or continue speeding past them.”
…
Rick Taketa, manager at McCully Bicycle & Sporting Goods, which also faces the crosswalk, said from inside the store he can hear tires squealing when vehicles suddenly stop for pedestrians.

“You just have to watch the cars,” he said. “You pick up speed coming down from that light,” he said, referring to the intersection of King and Punahou streets.

The ongoing neglect of death-trap crosswalks on S. King Street and elsewhere should raise some questions. For example:

1. Why are the crosswalks on S. King Street not equipped with blinking lights to help end the carnage?

2. Why are signs not posted, or missing signs not replaced, at every single crosswalk?

3. How many deaths will be required at this crosswalk before something is done?

4. How come the DOT administrators still have their jobs?

Of course, there will be more deaths in these crosswalks. Hawaii will continue to hold the national record for senior pedestrian deaths. Strangely, we seem to aim for this distinction year after year. It’s a disgrace.