“
The solution will come not with good intentions, new schematics or even blueprints; the solution comes when bulldozers are breaking ground for new affordable housing.—Richard Borreca, Star-Advertiser
”

That Honolulu needs to solve its growing shortage of affordable housing is undisputed. That Honolulu is doing nothing about it ought, therefore, to be a concern.

That Honolulu faces a crisis in homelessness that is only growing is undisputed. That Honolulu is doing nothing about it ought, therefore, to be a concern.

According to a Google search, the last time the phrase “Housing First” appeared in the Star-Advertiser was on March 22, 2015, in an article headlined Hiccups shake confidence in Housing First.

Housing First, of course, is the evidence-based approach to reducing homelessness as much as possible by providing housing and accompanying supports to enable people to remain housed and jump start their lives.

The success of Housing First is no mystery. It has been successfully implemented in other states and municipalities with great success, and has proven to be much cheaper than not implementing the program. See, for example: While Honolulu dithers, a Canadian city says it has eliminated homelessness, and Utah homelessness is down 91% over 10 years (5/21/2015).

Chronic homelessness in Utah has dropped 91 percent in the past decade under Utah's "Housing First" initiative, state officials announced Tuesday.

As we have often suggested, the homeless encampments now bugging the city and perhaps Governor Ige are just the visible tip of the iceberg. The city and state are avoiding, not confronting, the need to get busy with a massive program to create truly affordable housing.

Instead, time, energy and money continue to go towards criminalization of homelessness and sideshows such as relocating the unsightly folk to Sand Island. That fulfills the concerns of business interests who are happy to be rid of the evidence of the housing crisis on their doorsteps.

The Governor, for his part, has put the job of housing czar on a month-to-month lease, and the office still doesn’t come with a budget. Commitment? Virtually none.

It seems that the newspaper is also not terribly interested in this crisis, which has been growing for more than a decade. The shortfall, when it has appeared in print, is staggering:

[Star-Advertiser, Advocates say Legislature could do more to help homeless, 5/15/2015] 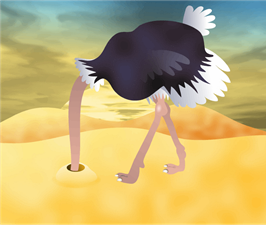 So though the numbers do appear occasionally, what’s missing is a suggestion of a solution. And that mention was also back in May, and we’re in middle of July already.

Not talking about it doesn’t make it go away. 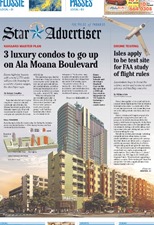 But somehow, and inevitably, it seems, the latest new luxury or ultra-luxury condo gets a guaranteed front-page promotion in the paper. Moreover, the story is placed in what on my college newspaper we called the “1-0” position on the page, the upper-left. We agonized over the relative importance of competing stories to our student and faculty readers, trying to pick the “1-0” and the “1-1” stories with particular care.

For the Star-Advertiser, the choice is simple. I can fantasize a newsroom conversation going something like: “Hey, any new condos today?” Unspoken is “Gotta put something up there the advertisers will like.” There’s no need to actually say it.

A senior housing project planned for Chinatown only made an inside page, deep down in the paper. Heck, though that’s something the people (readers) would be interested in, the housing developers will likely never take out even one of those full-page ads that the publishers covet.

Every paper operates under a policy that determines how news decisions are made, whether explicit or de facto. On the college paper, our struggle to present the news appropriately was on behalf of our readers. The huge spreads on the S-A front page devoted to luxury condos at the expense of whatever might really be important on that day suggests what that paper’s policy might be.

Gabriel Lee, American Savings Bank executive vice president, took over as chairman of the Chamber of Commerce Hawaii on Thursday at the 165th annual membership luncheon at the Hilton Hawaiian Village’s Coral Ballroom.

Dennis Francis, president and publisher of the Honolulu Star-Advertiser, concluded two years as chairman of the state’s top business organization and welcomed Lee in his new role.

Today’s column by Richard Borreca is a must-read. Don’t miss it if you are a subscriber, or check it out while waiting on the supermarket checkout line. Here’s a snip that illustrates how long the state has ducked dealing with the growing problem of houselessness.

The meeting that Borreca describes below took place in 1990:

According to the comprehensive final report of Homeless Aloha, Inc., the former umbrella nonprofit organization, Waihee met with then-Mayor Frank Fasi to endorse a 500-person tent city at Aala Park.

The pair came up with “a five-year strategy which called for retaining all current permanent transitional units, construction of 500 additional temporary units and funding shelter/social service program for homeless families with children.”

A law was passed — the Homeless Families Assistance Act — and new powers were given to the director of human services “to establish and maintain homeless shelters.”

The Homeless Aloha wrap-up report written in 1994, however, says that “the fragmented approach results in small piecemeal actions with questionable results.”

New York City also finds itself with a crisis of housing and homelessness. Contrast Honolulu’s inaction with Mayor de Blasio’s plan to create adequate affordable housing in his city in the sidebar on this article.