New York City’s mayor, Bill de Blasio, promises to build 200,000 affordable housing units (see Daily Show interview at the bottom of this post, starting at about 06:45). NYC is an expensive place to live, similar to Honolulu, but his aim for the first 10,000  (at 60 percent of area mean income) should put people into apartments. In Honolulu? We’re no place near planning similarly affordable housing.

Only half tongue-in-cheek, I’ve speculated that by 2050 Kakaako could resemble Hong Kong. The ultra-rich investors and occupants will need their fancy food stores, of course. In addition to the giant Whole Foods and nearby Dean & Deluca at the Ritz Carleton, they’ll want cheese. Lots of cheese. The point is, the rich will be provided for, made to feel at home. In what should be our home. 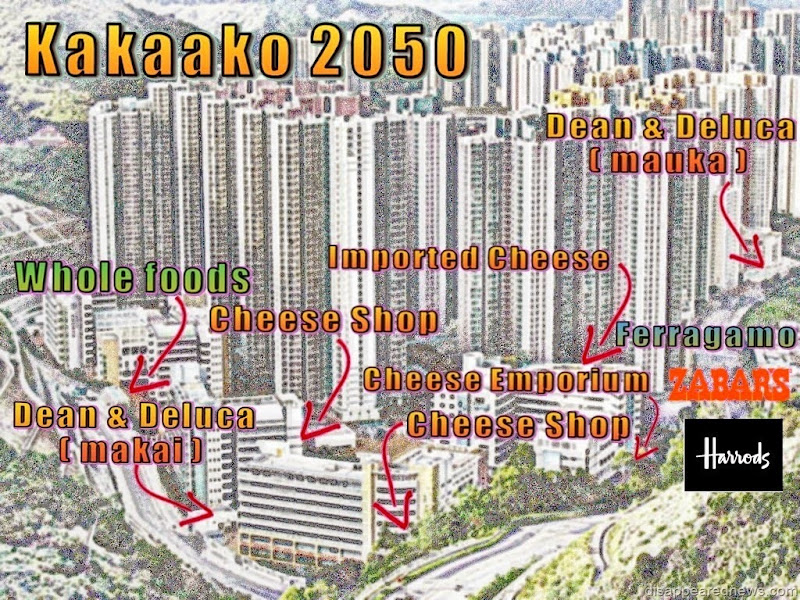 Wealthy investors can still get a good deal in Kakaako. In Hong Kong, meanwhile, the Wall Street Journal reports that so-called “mosquito-sized units” are in demand. And they are not at all cheap. 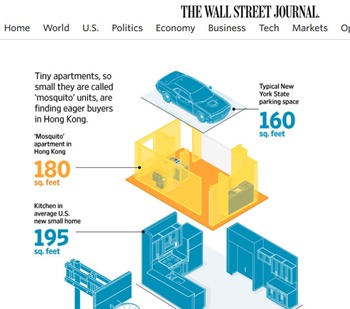 For more information on these tiny units, some of which are only 180 square feet, and for a larger view of the diagram at right, please see the Wall Street Journal article. The diagram compares the size of an apartment to the size of a typical parking space for one car.

Meanwhile, our city government is planning units a fraction of the size of a parking space as “temporary” living quarters for the chronically homeless on Sand Island. I used quotes because without a supply of permanent housing in the pipeline, those temporary little boxes (“cockroach apartments??”) could easily become permanent.

Our daily newspaper loves to devote front pages to giant pictures of luxury condos soon to come, but doesn’t dig too deeply into the housing issue for the rest of us. So we are treated to a view of the infinity pool at the “grand penthouse” atop a building planned for Ward Village (see: There goes the neighborhood, 1/22/2014) while there’s little focus on housing for those earning Honolulu’s modest incomes.

There is intense competition for any affordable housing in Honolulu. Families with several generations living in crowded conditions will also compete.

What we need is a solution to our housing crisis, and in the short term, implementation of Housing First so that people can be moved out of the Sand Island cockroach boxes if those are ever implemented.

Meanwhile, there should be no shortage of investors and potential residents for the housing that HCDA, as an arm of the state government, is actually planning:

Housing markets with the potential to draw a virtually endless supply of well-off outsiders into their communities, it turns out, endure an almost inexorable increase in rent and real estate prices, according to a recently published policy brief from Todd Sinai, a real estate economist at the University of Pennsylvania.

Yes, the HCDA is working hard to provide the rich and the ultra-rich with what is (for them) affordable housing.

I’ve long advocated rent control and rent stabilization as parts of the solution. From a Civil Beat article:

Growing awareness of the affordable housing crisis on Oahu has led to a flurry of proposals and policies out of Honolulu and the state.

And yet, in the many places where policymakers and administrators debate responses to the housing crisis, there is an elephant in the room that is rarely, if ever, seriously discussed.

The pachyderm no one talks about is rent control. Its footprints endure in many towns and cities that have confronted housing crunches across North America and Europe.

It leads to a question: Why don’t we seriously consider it here?

If I may interject my own answer: because lawmakers seriously proposing rent control would effectively be biting the hands that feed them. Developers contribute too much to politicians at all levels in this state.

A second answer might be that a politically disengaged public has not placed demands on legislators sufficient to cause them to tackle the problem of providing truly affordable housing. Nobody is pushing them hard enough to make anything happen.

Somebody’s very busy planning. Just not for us. So here’s what we get (or more accurately, what the wealthy will get): 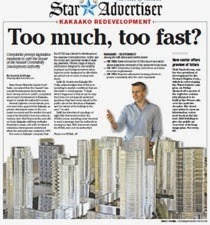 To close, my vision of Waikiki should rampant development continue: Click the thingy at the lower right for full screen.