There goes the neighborhood


“
“The income stratification is more dramatic and that brings this [luxury hotel development] on,” he said. “That’s what we’re really talking about, highly conspicuous consumption as wealth flows from the broader population to a very small subset.” --David Loeb, a senior hotel analyst at Robert W. Baird & Company in a New York Times article on luxury hotels
” 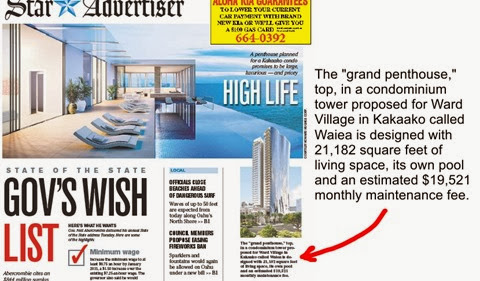 The pull-quote above is snipped from a New York Times article describing the growing luxury hotel market. In effect, the condo penthouse described in the Star-Advertiser article is similar to a luxury hotel unit. It’s no place that you or I could afford to stay.

The penthouse features an “infinity pool” which merges the pool water with the ocean view, but they omitted a helipad. Darn, the owner will have to get to and from the airport in his limousine in traffic, just like the rest of us.

Once again, we learn of another towering condo going up in the Kakaako area through a front-page lead story in the Star-Advertiser. Isn’t there any more important news in the world today that should go on the front page? On the other hand, maybe the editors are doing us a service—chronicling the destruction of Honolulu as we know it.

Oh, Honolulu will continue to exist, but will we be here? The median cost of housing continues to rise into the stratosphere. We, the citizens and voters, do not benefit from the kind of luxury housing that profits these developers. The routine approvals for the exemptions that make their high-rise-high-cost units possible are anti-democratic. Unless we regain control of the urban planning process, we will continue to be planned out of our own city.

It is natural that Honolulu should have a few ritzy development projects—but what we need is workforce housing, affordable to the average Jane or Joe, not luxury digs targeted for billionaires and outsiders.

That all we seem to get is unaffordable housing is a failure of government on both the state and city level. But it’s a failure that we are allowing to continue.

Another aspect of the political sellout of our city is the current attack on open space and urban parkland. Jefferson School is in jeopardy again because it has too much grass. The grass is a public asset, as is the entirety of Kakaako Waterfront Park, also threatened with commercial development. Neither the state nor the independent HCDA should have the right to destroy what the public owns and values.

Walking around Kakaako today, one sees wall art of bicycles and other themes intended to create a people-friendly image. It’s a con, 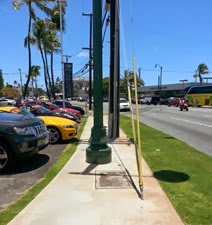 however. Just a couple of blocks makai are sidewalks blocked by lampposts installed right in the middle of the walkway instead of along the grassy edge near the curb. No one in charge really cares about making the neighborhood people-friendly. And of course, much of what is now painted prettily will be torn down as the luxury condos go up.

If allowed, the HCDA will transform Kakaako into a high-density housing area that doesn’t fit Honolulu. Forget a “Hawaiian sense of place” entirely, the area will more closely resemble Dubai.

Development that depends on exemptions does not create an environment where people want to live, work, play, and shop. Important also is the load that these building will place on infrastructure. Besides sewer pipes, demands will be put on Nimitz Highway as thousands of new cars are added to already congested traffic. Height limits and other zoning and environmental laws were created for a purpose. Allowing an authority to operate outside of the law, granting exemptions routinely, makes a mockery of the urban planning process.

The argument for building housing near the workplace only works if those working in town can afford the nearby housing. Hint: that’s also a con. But you already knew that.

Once again, we learn of another towering condo going up in the Kaka'ako area through a front-page lead story in the Star-Advertiser.

If that's true you need to up your game. There were plenty of public meetings, hearings and community briefings about this project. The meeting agenda and schedules were posted on the Lt. Governor site per law. Meetings were held on mornings, evenings and weekends. Furthermore this condo was discussed at the local Neighborhood Board and has been a part of the Kaka'ako Master Plan and Updates since maybe 2011. All the public documents are available on line at HCDA website. Frankly, anyone concerned about development issues should be ashamed to declare they just found out about this in the daily paper.

This "we found out too late" crap is just that...crap...and an excuse for people who won't get off their duff and get involved. You ever go to an HCDA meeting? Except when a proposed condo blocks somebody's view, thereby attracting the senior NIMBY crowd, the attendance is maybe a dozen people.

This expensive condo is being built with uninterrupted ocean views on some the most prime real estate in Hawaii. This is not the site for "affordable" or "workforce" housing. But in order to secure a few relatively minor modifications the developer is building affordable housing up by the old Dixie Cafe site. You failed to mention that point which is kind of important.

The true elephant in the room is the monstrous Transit Development Overlay that will be introduced this Spring/Summer which will provide for huge increases in building heights and densities. That info is available right now in draft form but has anybody written about it? Have you read it? Probably not but 2 years from now people will be saying, "I just found out in the Star Ad."

Sorry, but this little rant of yours just makes you look out of touch with what is really going on.


Usually, a comment with this tone just wouldn't get posted, but you do make some important points.

Yes, I have attended HCDA meetings. I have noted that the attendance was low, but that may be for good reason. The people I have spoken to at meetings and outside indicated that they felt that they were being told what was to take place rather than being consulted. In other words, why participate in a sham?

If true, the HCDA is not alone. Hawaii government agencies required to hold public hearings do hold them, but they are not required to take whatever the public may say into account. And often they don't.

Regardless of HCDA notices, I believe it is still true that most people will learn about the latest condo development from the newspaper. People do not flock from all over the island to a local neighborhood board meeting.

But let's get to the larger issue--whether or not this or other developments have been in the plans, the problem is that the area will be transformed as each of them is built. Each one is, so to speak, another nail in the coffin. Also, the failure to develop true workforce housing in favor of these high-priced condos affects more than just the neighborhood, since were there truly affordable housing, anyone from anywhere could move in.

The HCDA is in the business of granting exemptions, and that's what it does. The development of affordable housing is secondary, and I am not the only one raising the issue of whether units going for $550,000 can be considered "affordable" or "workforce."

There are several bills in the current session of the Legislature which would modify or repeal the HCDA. So we'll hear more if any of them move through the committees. I'll post the information shortly.