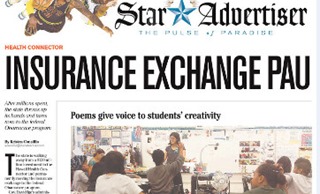 may come as a result of the State’s action. Depending on how the Supreme Court rules later this month, those receiving premium subsidies could lose them.

That’s my interpretation of articles posted on the web warning of chaos in the system should the Supreme Court rule against the federal government.

Later this month the Supreme Court will announce its decision in King v. Burwell, a case that threatens the health coverage of millions.
…
The case challenges the federal government's provision of tax credits (also known as "subsidies") to help low- and middle-income people afford their health insurance premiums in states that didn't set up their own health insurance marketplace (exchange). The plaintiffs claim that Congress never meant to extend premium tax credits to consumers in states that didn’t establish their own marketplaces directly but use marketplaces set up by the federal government (federally facilitated marketplaces).

The article suggests that an adverse ruling by the Supreme Court could result in premium increases of an estimated 35% in 2016 and throw the system into chaos. Without premium support, many would become uninsured.

If the ruling goes the wrong way, will the fact that Hawaii used to have a Health Connector matter? I’m not sure the answer to that is known at this point.