“
Oahu has lost one-fourth of its beaches and of those remaining, about 70 percent are eroding. If state and county officials don’t start working to conserve what’s left of the sandy shoreline, most of the island’s beaches could disappear by the end of the century, say scientists.
”

Civil Beat reporter Sophie Cocke did a superb job with this story—it’s why we need good journalists and media that are willing to employ them. Her story, Oahu Faces a Future With Far Fewer Beaches (Civil Beat, 4/9/2015) is a must-read. There are four related articles highlighted at the top of their page. 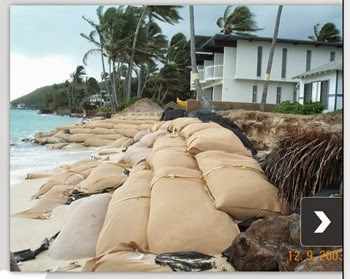 Go read it now. There’s a morph of Lanikai beach then and now, and a superb slide show with embedded videos—it’s like you’re there, witnessing the beach destruction. The image at the right is snipped from one of the Civil Beat slides.

A mere blogger can’t do a proper job with this issue, but I tried to make a start with Kailua to get even more tourists as Waikiki washes away (4/7/2015). I’m focusing on the economic argument—our economy will crumble along with the beaches unless something is done. I’m hoping our elected officials will take the hint.

“I think by mid-century we are looking at a future where we are down to just a handful of healthy beaches and by the end of the century those will be disappearing, or gone already,” said Chip Fletcher, a coastal geologist and associate dean at the University of Hawaii’s School of Ocean and Earth Science Technology, who is one of the state’s leading experts on beach erosion.

What exactly is the future of our economy without tourist beaches?

This yet another aspect of urban planning that needs to be attended to. If our elected officials won’t do it, we need to.

Planning to the people.