An article on meth that raises more questions than it answered 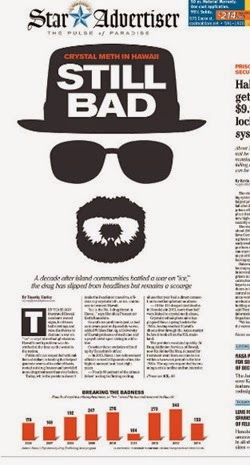 A first impression of yesterday’s Star-Advertiser front page: What did Ed Morita, former pastry chef of the Highway Inn, do that was “still bad?” The image looks just like him, including the hat and beard.

But anyway, what is the story about? It purports to show that Hawaii’s crystal meth problem is “still bad.”  Perhaps it is, but the article raises questions that could have been answered had not most of the front page been devoted to a useless illustration.

For example, the graph on the bottom is supposed to be meaningful, otherwise why was it put on the front page? If meth is “still bad,”, how come the number for 2014 is better than any year since 2007?

Oh, and there’s that crazy low number for 2011 (towards the middle-bottom in the image). Clearly something happened that cries for explanation. There was none. That’s an “outlier” that could mean anything. In the absence of an explanation, it must be discarded.

The bar graph represents pounds of meth seized. So the numbers could simply be related to the effort that law enforcement is putting into seizing. If so, then does the recent decline would contradict the headline, in that less is being seized these days. No, it’s impossible to say how that number relates to meth usage, given the unexplained drop in 2011. You’d think that meth usage would change slowly, year to year, as a first guess. As to the unexplained bad year for seizures, that puts the usefulness of this statistic as a measure of actual meth use in doubt.

The meth problem certainly was bad many years ago. Here’s one mention:

Some 37.4 percent of men jailed in Honolulu tested positive for methamphetamine in 2001, higher than any other major U.S. city, the federal government says.

That’s a fair measurement, but still must be taken in context, since that number would also depend on the varying priorities of law enforcement in different jurisdictions.

The article raised good questions that beg for better reporting. For example, if there is a 40-person waiting list for drug treatment at one facility, is the budget adequate? Has it been cut, or do we need to spend more on treatment? How long do people wait on the waiting list? Is it just a couple of days (no big deal perhaps) or a couple of years?

As an illustration of my point, a waiting list developed years ago for vocational rehab services in Hawaii when the budget fell short. Because of federally-mandated prioritization, some people on the list received services immediately, others perhaps never. Another example: a waiting list developed for senior services when the governor at the time failed to release the money. The state did not know how long people waited for services, or how many were re-admitted to hospitals because they could not get services. One last example: the list of beneficiaries waiting to receive Hawaiian Home lands is so long and moving so slowly that people die while still on the waiting list. Clearly, writing that there is a waiting list and leaving it at that is insufficient.

So we need to know more than the article said.

The “war on drugs” in Hawaii was also a struggle by advocates to promote treatment over incarceration. Questions arose also and have persisted over mandatory minimum sentences and changing parole to direct those who relapse into treatment rather than incarceration.

There is an educational program directed at school children that the article suggests may be effective—it would be good to have learned more, with useful numbers so that the effectiveness of the program could be evaluated. Does it just sound good, or is it really working? Convince me. With real numbers.

And lets Just Say No to bad statistics.