Kailua to get even more tourists as Waikiki washes away

Breaking news: The ocean is coming in, folks, and the sand is going out. The On Politics column on the editorial page of today’s Star-Advertiser lays out the facts as we now know them. The information on Kailua Beach came from the abstract of a UH paper related to the links given in the column.

Do tourists visit Hawaii to spend their time in Bishop Museum? Not really. They come for sun and sand. We all kind of know that the sand is on its way out as sea levels continue to rise.

It’s not our fault. Congress chooses to vote again and again to repeal Obamacare instead of doing anything useful to stave off global warming. So just kiss Waikiki beach goodbye. It was nice while we had it.

This erosion should change tourism (and the economy of Hawaii) bit by bit as it begins to happen. Oh, I suppose they could sprinkle some sand around the hotel pools and pretend, but after awhile, when waves lap at hotel lobbies, it’s time to raise anchor and move to another location. That’s costly. At least, pick a spot which has an airport that’s not under water.

Richard Borreca covered a lot of territory in his column in today’s paywalled Star-Advertiser, Constant beach loss will alter Hawaii as we know it (Star-Advertiser, p. A9, 4/7/2015). It’s worth finding a copy of the paper if you don’t subscribe.

Fortunately, Borreca includes several links to a UH website and one of those links to the abstract of a paper that is also paywalled (sigh) by the Springer journal that published it. While it’s discouraging that everyone won’t have a chance to read that important paper, the abstract is scary enough for 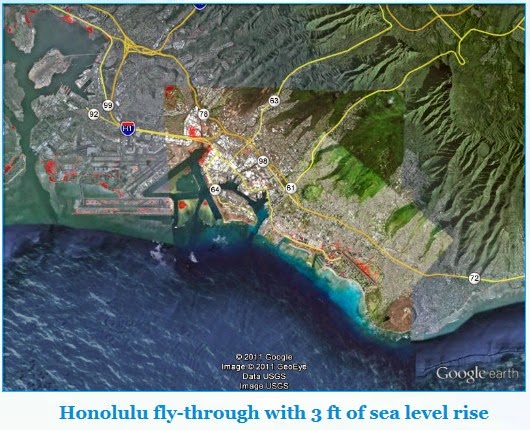 now—since the rest of us seem ok with wallowing in complacency about global warming, who cares, anyway. It’s all we need for the moment. And the links are to some maps you can just look at to get the bad news visually. There’s even a Google Earth flyover of the Honolulu of the future.

Flying might be the preferred way to travel as the roads flood over (see the red spots in the visualization). Those are spots where ground water rises. Even building sea walls won’t help, the ocean sneaks in underneath and bubbles up where it wishes.

The paper is Doubling of coastal erosion under rising sea level by mid-century in Hawaii (Springer, 3/18/2015). A snip from the abstract:

We estimate rates and distances of shoreline change for ten study sites across the Hawaiian Islands. Excluding one beach (Kailua) historically dominated by accretion, approximately 92 and 96 % of the shorelines studied are projected to retreat by 2050 and 2100, respectively. Most projections (~80 %) range between 1–24 m of landward movement by 2050 (relative to 2005) and 4–60 m by 2100, except at Kailua which is projected to begin receding around 2050.

Now, if the rate of sea rise is accelerated (which the authors caution they have not taken into account), of course changes will take place sooner.

It’s not only Waikiki’s beaches that will wash away—since tourism is the key to our whole economy, this paper, as well as other studies, ought to start a state-wide dialogue on urban planning in the face of predictable changes due to global warming. If we don’t plan, our economy washes away with the sand. Should we build hotels elsewhere? Where?

It’s no longer just the current tension between covering irreplaceable farmland with profitable developments. Think: a 15-year or 30-year mortgage puts the future owner at risk if there is no viable economy to support the monthly payments. If we let tourism wash away, even the so-called “affordable” housing being foisted on us today will become unaffordable. 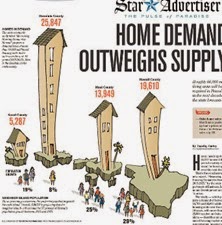 And we can’t cope today, as the ridiculously large illustration on the cover of today’s paper confirms. What no one seems to admit is that the gap between need and availability of affordable rentals can’t be closed any time soon. How will we provide enough affordable (meaning low-cost) rentals in the future, unless we have an idea of how to keep those who now work in Waikiki employed? If jobs go out with the tide, the pressure is greater for even cheaper housing to be built.

If we do nothing, most likely we’ll wake up one morning after a storm surge that coincides with high tide to discover that too much sand has washed away to ignore. Hotel operators will panic. We’ll bring in more sand, at great expense.

By that time, I hope our state and local government will be actively planning what to do long-term.

Oh, sure, that’s so far away, why worry ourselves now.