“
Bob Guild, vice president of travel agency Marazul Charters, said his groups have had to stay in private apartments recently instead of hotel rooms because beds are in such demand. … In the two weeks after the regulations were released in January, 1,300 requests came in compared to 30 requests during the same time period in 2014. … “We are generally telling people that nothing is possible until next season, beginning in October. And there are people still trying to get in right now.”
” by Larry Geller 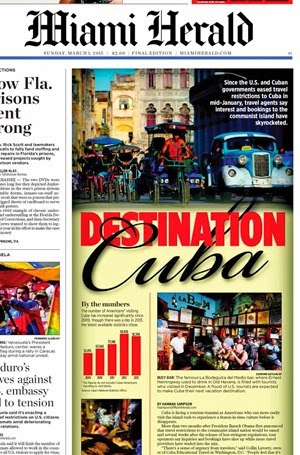 Hawaii is in no danger of losing its Asian visitors, at least in the near term, but in the coming decade or so it could feel competition from the sleeping giant that is Cuba.

All it would take is for Cubans to learn how to do travel PR in Japan, Korea and China.

And it’s impossible to ignore the lure of a prime destination so very close to the US mainland that one could almost swim there.

According to an article in today’s Miami Herald, the boom has already begun—at present, it’s a rush to see Cuba before it is modernized.

This is stage 1: people trying to get there before Cuba becomes a cliché destination. It was like that once with Nepal, for example. We sent postcards to our friends from Kathmandu. It was very exotic. Now the place is overrun with traffic, tourists, and the air is spoiled by smog, I understand. Burma was exotic once also. But those are little league destinations—Hawaii and soon, Cuba, are in the big league.

Stage 2 will be PR competition, travel mag coverage, and the beginning of a hotel boom. It’s hard to say how that will go, given the stagnant condition of Cuba’s economy, but hey, if there is money to be made, Hyatt, Marriott and more will be anxious to get their share of the action.

The picture at the lower left of the Miami Herald front page shows cigars being rolled in Havana. It’s a great draw. There’s no chance of Cuban cigars going out of style—America is starving for them.

“We had the President of the United States talk about people-to-people travel and the fact that you can go and that we want to make it easier,” [president of New York tour operator InsightCuba Tom] Popper said. “After Dec. 17, tens of millions of people said, ‘Oh yeah, President Obama said I could go to Cuba.’”

No doubt Hawaii will always be a popular tourist destination. But we have all of our economic eggs in that one basket, basically, and if climate change brings us more dangerous storms, we could get knocked out.

And of course, they can do hula on the beach in Havana. Why shouldn’t Outrigger consider building a Hawaii-themed hotel over there? Hmmm?

It’s time to think about this.