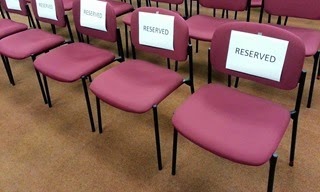 Neither Calvin Say nor his attorney appeared at the brief hearing today at 1 p.m. at the State Capitol to receive the report of the special committee investigating his qualification to hold office. The seats reserved for them remained empty.

The committee posted a report (see House Special Committee Report 2 here) that concluded Say is qualified to sit as the member representing the Twentieth District. The vote was unanimous, including the sole Republican committee member.

This isn’t “disappeared news,” it will be on the TV news reports this evening, and is already posted on Civil Beat and the Star-Advertiser website.

During interviews for the media after the hearing, attorney Lance Collins stated that the petitioners plan to continue their challenge. He also intends to pursue the matter of the release of voter records by Chair Karl Rhoads to Say’s attorney that Collins believes should not have been made public.

While it would not change the outcome, it is at least curious that information was provided only to one side, and I’ll admit to finding it also curious that Say did not attend the hearing today. The picture of Say posted at the top of the Civil Beat story was taken at the February 13 hearing, not at today’s hearing.

Maybe Say "intended" to come to the hearing...