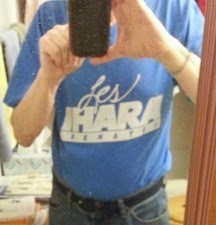 … Ihara has known David Ige for 29 years and is a close friend of the governor and his chief of staff, Mike McCartney.

A vote against Ching would be a strike against the governor only four months after he was elected. But after much introspection, the senator told Ige on Tuesday that he could not vote in favor of Ching.

That decision helped turn the tide in the closely divided 25-member state Senate against Ching, whose nomination had generated vociferous opposition from environmentalists and others.

During the Senate committee hearing on the Governor’s nomination, Ihara had said that he would vote no in committee, but yes on the floor. It was good to see that after weighing all the competing forces tugging on him, he had the courage to change his mind.

The Civil Beat article notes that as of yesterday morning, before the nomination would have come up for a vote, Senators Ihara, Chun-Oakland, and Kalani English had decided to vote against. Apparently that either doomed the nomination or at least made it questionable whether there would be enough votes for the Senate to consent.

Despite wrangling over numerous contentions measures, I’ve noticed that Hawaii’s state legislature has a tendency to do the right thing in the end. Maybe not soon enough to please everyone, and maybe not everyone would agree, but I am convinced that we have a much more responsive legislature at the state level than at least many states on the Continent. And this is despite its many flaws. Yes, I needed to say that.

That state senators would weigh the multiple ties and loyalties to a former colleague now governor and decide to oppose his strongly expressed will demonstrates this ability to respond to direction from constituents.