Hidden in plain sight: the workings of the House committee to investigate Calvin Say’s qualifications to hold office

There is a new document in the ongoing saga of how to determine former Speaker Calvin Say’s qualification to hold office. But you’d have to be really obsessed to spot it. The Capitol website gives no help whatsoever. (It’s here, and relates to Say’s claim about ownership of property… have a look if you like.)

If only the House prepared a webpage accurately describing what they are doing. For example, Special Committee to Investigate Calvin Say’s Qualification to Hold Office.

If only the committee were really named something like that. But no, first hint of obscurative intent is what they called it: House Special Committee to Consider Misc. Comm. No. 1003. Try remembering that a couple of years from now when googling what was decided at the hearing.

History should be plain. It was the “Revolutionary War” not the “Special Action #1076 With Regard to the British.” Whether George Washington formed any Misc. Committees or not, we really don’t much care.

Now, in order to bring you the latest Disappeared News, I learned that the House, in its wisdom, and I use that term lightly here, has done its best to post the info on the Capitol website while keeping it as far from public view as possible.

Let's have a peek at the web page on the Capitol website for this hearing.

It has an RSS feed (the orange thingy at the upper left), but nothing new ever came up in the feed. When I went to look at the page, here’s all there is: 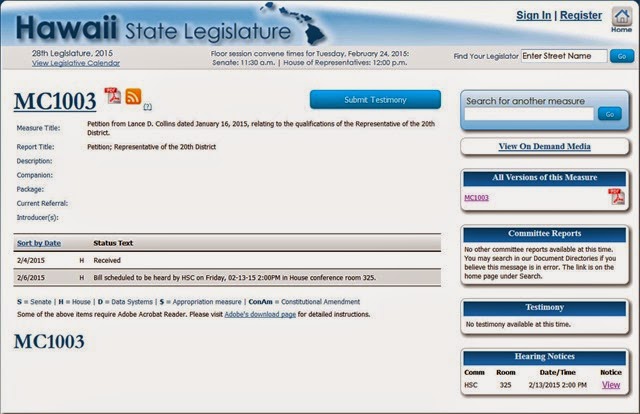 None of the documents submitted to the committee are listed. In fact, Calvin Say’s name is never mentioned. Not the best, if one is searching.

I didn’t even suspect there could be someplace where the House was hiding all the information. But there is. You have to go here (who would know?): 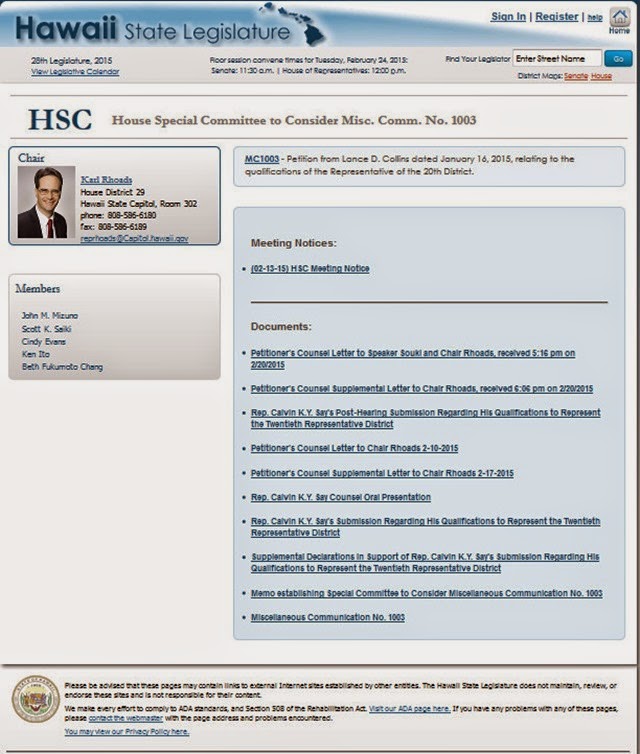 This page is titled HSC. Go figure. And notice that there is no RSS feed—no orange thingy at the upper left. So there’s nothing to plunk into my handy RSS reader to follow this committee. Anyone not knowing about this “secret” page would just keep checking that other one above, and miss the whole thing. In fact, the MC1003 page can be considered a decoy—if you think you’re following the hearing, you’ve been taken in.

Is that what is intended?

As a final blow, several of the documents are simple scans that would not be readable on a screen reader for the blind, and are not searchable. The state receives certain federal funds in exchange for which its information systems are supposed to be “Section 508 Compliant.” At the bottom of this page is a notice about ADA and S. 508 compliance (see page or click the image below for larger).

Let’ just say that if they wanted to hide the workings of this committee yet say they are not, they could not have done much better.

Now, also, only the top two documents listed are time-stamped. Why?