Does the Hawaii legislature know anything at all about running a university? 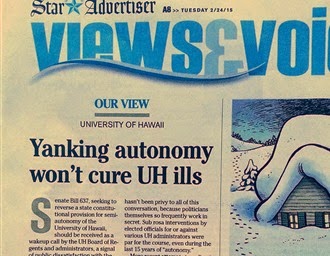 … returning to the additional micromanaging layers of oversight by lawmakers, the system that was in place before 2000, merely leaves UH prey to even more political pressures. The Legislature itself has a less than stellar record where management of the university system is concerned.

The cure is far more difficult and nuanced, which is why lawmakers have seized the opportunity to take easy action, albeit through a "fix" that ultimately won't fix anything.

The editors are entirely correct. Been there, done that.

Yes, the university seems to be unable to manage itself. I’ll go farther than some in offering that it is also failing to keep pace with technical changes (e.g., on-line coursework) that could both benefit students living in a state so separated from itself by water and that could save both students and taxpayers badly needed cash.

It’s not disappeared news at Disappeared News that there is a model describing how UH (and no doubt other mid-level colleges and universities) is run: the Garbage Can Model. It doesn’t work very well. Until it is replaced, it probably doesn’t matter much who is in charge over in Manoa.

Now, our legislature doesn’t even have a model of management suited to any other institution, government or private, that could be applied to sharing the operation of a university. It is, in fact, completely unqualified and unprepared for that job and responsibility. It has a very simple model that they believe works for themselves, but which is applicable nowhere else.

For example, the usual common-sense rules of conflict of interest, bribery, transparency etc. don’t apply—the lege has exempted itself rather than put in place best practices. Transparency? It was a struggle (for example) just to get conference committees to meet in public, never mind that they (and other committees) do the majority of their work behind closed doors.

There are no qualifications for “management” other than being elected. No degrees, professional credentials, or records of success such as one would need in the “real” world. There is also no reason to expect that the legislators themselves can do a better job running UH than can the appointed Regents. Quite the opposite, actually.

In the past I might have said that it isn’t rocket science, but in Hawaii, perhaps it is. Can it be so difficult to correct the problems at UH that we are unable to deal with them? That would be sad, but it’s a possibility. One doesn’t come to Hawaii to learn rocket science. It’s just not us.

Hawaii’s legislature, or any state legislature, for that matter, would seem to be arguably incompetent to run a university. That criticism should rest lightly, it is simply a description of a mismatch that has little prospect of success. And really, does anyone think a university run by unqualified politicians will work better than one run by qualified educational leaders?

What is needed? It shouldn’t matter so much who leads UH, if they are operating

within a solid framework that gives direction to every member of the faculty and staff.

Large universities have figured that out, although the going was not always smooth (see, for example, Chapter 6 of Making Harvard Modern).

But how to get there, where “there” is something describing a well-run institution? I am not suggesting that we adopt Harvard’s path—it would not work at a smaller institution, and as the book makes clear, Harvard has plenty of its own, unique problems.

There should be a way to move UH forward. It has a school of business, for example, that might reasonably be tasked with studying this. Just a thought.

To truly solve UH’s problems and to help assure smooth sailing in the future, legislators might put in place a mechanism designed to “Make UH Modern” in every sense, including its ability to manage itself competently.


The criticism has been around "micromanaging." You ask a good question--I wonder if their responsibility for keeping within their budget already means that accountability to the legislature and to the public is required, at least to that extent.