You want this drone, don’t you


“
The U.S. Federal Aviation Administration is developing regulations to open the country’s skies to drones by 2015. The agency estimates that 30,000 drones will be hovering above towns within seven years. The vast majority of U.S. drones will probably be used for agriculture, according to the AUVSI [Association for Unmanned Vehicle Systems International] report.
” 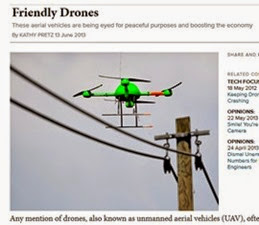 For most of the time I’ve written about drones, they were basically small airplanes fitted with cameras. Then, due to a spate of cheap hobby quad copters produced as toys in China, the skies shifted to the quad copters. These can be flown indoors or out, and can be had for anything from around $20 (including postage!) to $2-3,000 or so. The lower price range doesn’t buy much more than a toy likely soon to be smashed as it bounces off household furniture, but the upper end, still affordable to hobbyists, is impressive. 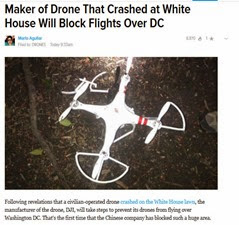 One of the more sophisticated types recently crashed on the White House lawn, making news across the country. The latest twist is that the Chinese manufacturer will rig the firmware to create a “No-fly zone” around Washington, DC.

Not that this will discourage evildoers who will find ways to bypass the firmware limitations if they can, or else buy other drones without the limitations. Nor will it remove the new requirement that the Secret Service monitor (somehow) what’s flying in the vicinity. It will be a tough job—these copters can come in low and come in fast.

Perhaps the Secret Service will have to deploy intercept drones of their own—kind of “drone-vs-drone” warfare.

You want one of these, don’t you?

Most of the quad copters seem relatively easy to fly. They differ immensely in stability, range and the camera equipment that they carry or can be fitted with. But have a look at the web page describing the Inspire 1, the higher-end sibling of the model that crashed on the White House lawn. 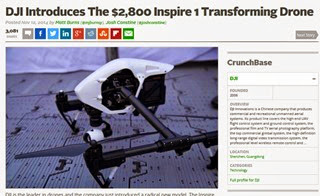 This one costs $2,800, which as the article admits, isn’t cheap. You can get something for less, but check this out anyway.

It’s sophisticated enough that very professional video can be shot of current events, tourism promotions, agricultural surveys, monitoring of all sorts, and advocacy targets. Yes, it will do selfies with Mt. Fuji in the background.

As an example of advocacy uses, a drone up in the sky even over public rights-of-way can see what’s going on in factory farms and produce commercial-quality videos of the atrocities it reveals.

This drone can even be run by two people for the best quality productions: one acts as pilot, the other as photographer. Both do their work safely on the ground a considerable distance away.

The drone can be flown indoors as well to produce stable high-definition video.

Anyone can create news-worthy video

New Yorker Jonathan B. Harper made good use of his drone during New York’s big snowstorm yesterday. He tweeted his video, which was soon requested in tweets from a couple of news organizations. Click here for his YouTube video. It’s very worth watching. 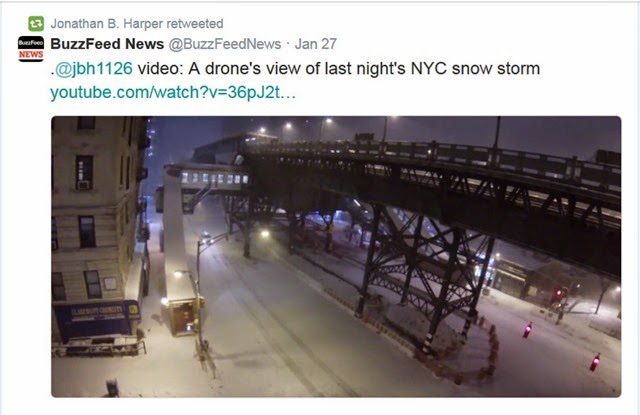 Jonathan’s video reminded me of advice I was given after news organizations in Hawaii began using parts of my rat video shot in November, 2009. I just said “yes,” because I was interested in publicizing the rat problem and the Department of Health’s unwillingness to even authorize overtime for the inspectors to check it out. The advice I was given, by a professional photographer, was that TV stations can afford to pay, and they do so. So perhaps I should have asked.

The takeaway here is that until news organizations routinely fly their own drones, amateurs might make back the costs of their expensive hobby. There’s great footage out there. Check out these promotional videos for possibilities. Click on the thingy at the lower right for full-screen. Each video goes on to the next in their series until you stop it.