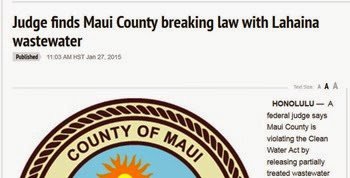 Maui taxpayers could find themselves responsible for a huge fine as a result of poor decisions by their county government. Yes, bad public administration can cost.

Because the county chose to dispose of wastewater that was only partially treated via four seaside wells, it was found to have violated the Clean Water Act.

Mollway already ruled in June the county violated the law by releasing wastewater through wells 3 and 4.

The plaintiffs in a lawsuit filed over the wastewater say high levels of nitrogen and phosphorous in the effluent are triggering invasive algae outbreaks that are killing coral.

Earthjustice attorney David Henkin says the county could be fined more than $100,000 for each day it has used the injection wells going back to 2007.

Maui taxpayers should decide how to handle this. It is they who will pay, not the public officials who made bad decisions along the way. Or not. One way or another, if there is a fine, the county will take it out of their wallets or purses.