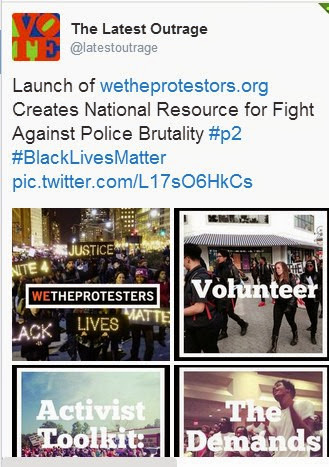 One of my ongoing beefs has been how our own daily paper, along with others nationwide, gave scant if any coverage to the ongoing and almost daily protests following the Ferguson and other police shootings. There have been many other incidents since Ferguson and the New York chokehold killing, by the way. Not that you’d know if you depend only on the outsourced national news coverage in the daily paper.

So to understand the breadth of the problem, we need to keep in touch with events via the Internet and alternative media.

It’s simple. One way: just check out the #BlackLivesMatter hashtag to get connected or caught up, and follow those whose tweets you like. Watch or read alternative news sources including Democracy Now.

The movement against police violence is quite organized. Thanks to @latestoutrage for the link to wetheprotestors.org as one example of how it is being done.

For related Hawaii news, count on Civil Beat. While nationwide media usually report only deaths at the hands of police, Civil included also injuries caused by the cops. For example:

At the most recent count, as Civil Beat’s Nick Grube reported, Hawaii’s police officers have killed at least 36 people in the last 20 years. During the same period, police and other Hawaii security officers injured at least 2,285 people seriously enough to send them to hospital emergency rooms.

If one has to make an economic argument, as Nick Grube’s article pointed out:

Yet, as debate rages across the country about police use of force, Hawaii citizens have been relatively silent on the issue.

In other words, you and I taxpayers foot the bill for police injuries and deaths.

Don’t you think our newspaper should be strong on this issue? And I hope Pierre Omidyar doesn’t get tired of supporting Civil Beat any time soon. But Civil Beat doesn’t reach everyone, particularly the older, newspaper-reading demographic.

Perhaps Hawaii citizens would be more concerned if they could read about the national and Hawaii movements in their newspaper.