“
Such laws are counterproductive, says Jerry Jones, the director of the National Coalition for the Homeless, an advocacy group. Otherwise law-abiding people end up with criminal records, making it harder for them to get back on their feet. A night in jail can cost three times more than a night in a shelter. Honolulu’s ban on rough sleeping has made the homeless more transient and harder for social-service agencies to find. Many are sleeping at the airport, ensuring that they are the first thing visitors see.
” 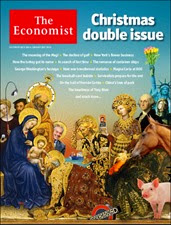 The deficiency and backwardness of Honolulu’s policy to reduce homelessness was the focus of Paradise lost: Catering to tourists comes at a hefty price for locals in the December 20, 2014 issue of The Economist, a news magazine widely read nationally and internationally. The “hefty price” (well, it’s the Economist, after all) refers to the cost to taxpayers of doing it Caldwell’s way rather than the Housing First way:

Several cities have reduced homelessness by using a different approach, called Housing First. Whereas typical schemes aim to get homeless people “housing ready”—that is, off drugs and in work—before placing them in homes, Housing First provides the home up front and then delivers the support needed to stay there. This saves money, says Matthew Doherty of the US Interagency Council on Homelessness, as the homeless otherwise tend to ricochet between expensive services, such as jails, emergency rooms and detox centers. A study from Los Angeles found that the public saves over $27,000 a year for every person in such a program.

[The Economist, Paradise lost: Catering to tourists comes at a hefty price for locals, 12/20/2014]

The article points out that Caldwell is planning to house only 100 people, and that “the new homes will not be ready for years.”

What’s the phrase? Too little and too late?

But by doing Housing Second instead of Housing First, that is, by criminalizing homelessness in Honolulu before the homes are ready,

Otherwise law-abiding people end up with criminal records, making it harder for them to get back on their feet. A night in jail can cost three times more than a night in a shelter.

What is it that the City Council and Mayor Caldwell don’t understand about Housing First? Apparently, everything.

Thanks to Kathryn Xian for tweeting this article. If you want to stay in touch with issues related to homelessness, you need to follow her tweets.