Cuba tourism gets the Colbert bump

It appears that tourist travel to Cuba is still restricted by federal law, so the just-announced rapprochement announced by presidents Obama and Raul Castro is not (yet) going to open the floodgates or the boarding gates. But perhaps it won’t be long before curious American travelers figure out that if they can get to Havana they can enjoy a world-class vacation at relatively low cost. 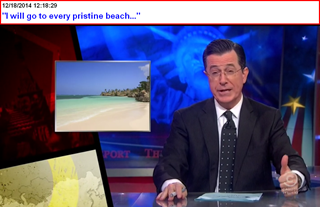 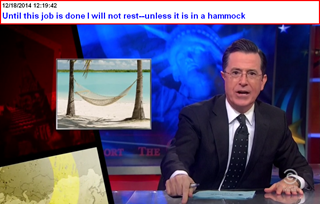 Yes, Cuba has pristine beaches and fine, relatively inexpensive hotels. The cost (of everything) is very reasonable compared to Hawaii, and they even serve up Hawaiian food at some of the hotels. It’s easy to check hotel prices on the web, and it’s clear that Cuba is an incredible bargain.

They grow and export pineapples there that were developed in a GMO laboratory in Hawaii. Agricultural cooperatives also offer mangos, avocados, and papayas. Heck, if costs keep rising here in Honolulu, it might one day happen that Cuban exports arrive at our big box stores. That is, if the Europeans don’t gobble it all up, as looks likely.

Besides beaches, there is the draw of Cuban food, which is already popular, particularly in Florida and the South. There is one Cuban restaurant in Honolulu. The first link is to an old article, which I spotted before writing After Fidel, will Cuba become the new Hawaii? in 2008 and Cuba opens up to tourists—Hawaii, watch out in 2009.

President Obama promises that Americans will be able to bring back $100 worth of cigars each trip. I’m not sure how that will work for a family of (say) four—do kids count?

Could Havana become competition to Honolulu for the American tourist dollar? Perhaps I was a few years too early in warning of a threat—Cuba did not open up with the inauguration of the new president. And tourism to Cuba is still not allowed. But give it a chance—even a Republican-controlled Congress might be moved to lift all travel restrictions if it means profits for American airlines and tour companies.

What will be the impact on Hawaii? Who knows, but at least our state government might want to monitor the situation. The lure of those pristine beaches is strong, and so are the cigars and the rum, I understand.