Protests at many cities around the country today are being covered extensively in real time on the Web—see, for example, Beyond NYC and D.C., police brutality protesters descend on cities nationwide (Mashable, 12/13/2014). 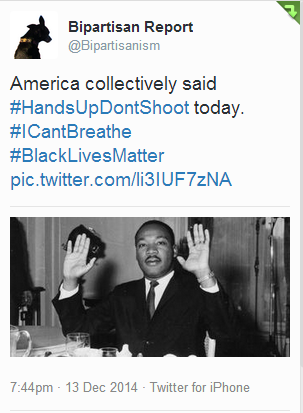 The almost daily protests across the country are significant in so many ways. Of course, their greatest import is that people are finally expressing their unwillingness to put up with the rampant police brutality in this country any longer—they’re “mad as hell” and not going to take this anymore! More to the point: it’s time police stopped killing black men and teens with impunity.

Another significance is that 25,000 people marching in New York City cannot be stopped. If they want to close down the Brooklyn Bridge, then they can do so (and they did). See the video below, which is a time lapse of only part of the NYC protest as it formed today. There were even more people than could be caught from one location.

Check in to Twitter or your breaking news app to keep track of it all.

I’ll have to admit to being really stuck on the fact that the Star-Advertiser ignores what may turn out to be one of the most remarkable social upheavals of the present time. Maybe that won’t turn out to be true, but it’s news today, and news that we’re paying for as subscribers but not getting.