While researching something else, I spotted this ad in the Star-Bulletin of December 23, 1914: 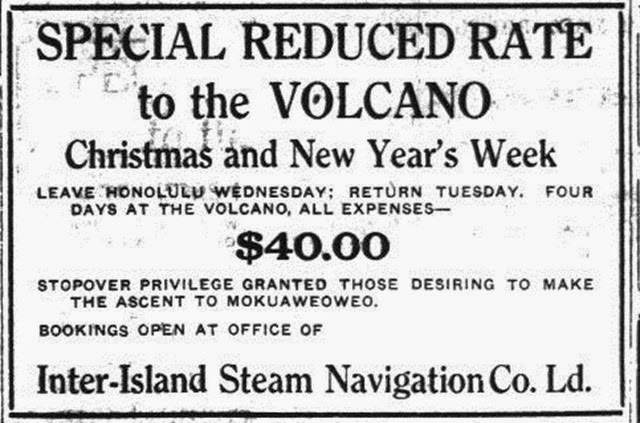 $40 was a lot of money in those days, I suppose, but it was an all-expenses included trip of five days. [Mokuaweoweo seems to be Mauna Loa.]

Could this have been Hawaii’s first “Super ferry?” According to the Wikipedia, source of much lazy research, the ships ran until 1947. The company formed a subsidiary that eventually became Hawaiian Airlines.

Inter-Island Steam Navigation Company was the company headquartered in Honolulu that ran steam boat service between Hawaiian cities from 1883 until 1947. On January 30, 1929 company founded the subsidiary company Inter-Island Airways that was later renamed to Hawaiian Airlines. Hawaiian Airlines today is a major airline.

The company was formed as a result of incorporation of a fleet of a few steamers owned by the captain Thomas R. Foster.

Company's passenger service between islands was discontinued in 1947.