Demonstrations continue against state-sanctioned violence against black men and teens

I found this via Twitter. It’s a report of a demonstration at Harvard Medical School by students, faculty and staff. Click the pic or the link below for a great picture and the trending Boston Globe story.

Yes, even though you can’t read about them in our daily newspaper, demonstrations are still taking place all over the country. 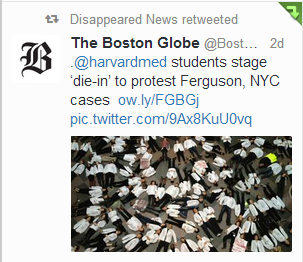 The demonstration, organized by the students, was part of protests nationwide by medical students Wednesday against the grand jury decisions not to indict two white police officers who killed two unarmed black men, in Ferguson, Mo., and New York City this summer. 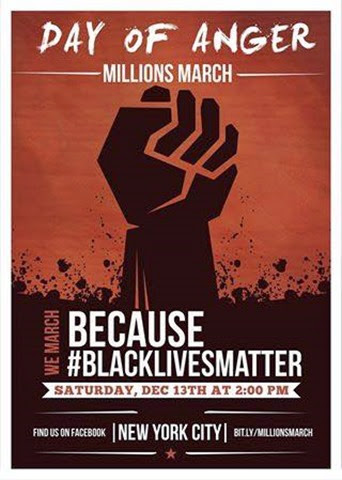 Large demonstrations are planned for this weekend. Here’s an announcement of an action in New York tomorrow. From one of several event pages:

The recent killings highlighted in the media belong to a pattern of state ­sanctioned violence against Black people dating back further than Jim Crow. Anyone who believes in justice, equality, and the value of human life has a responsibility to stand up and say “no” to the senseless killing of Black people and the impunity of police who kill.