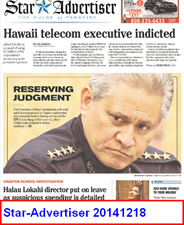 Kealoha conduct in court and the dismissal of the “mailbox theft” case with prejudice, meaning it cannot be brought anew, continue to reverberate in the news. In fact, on December 18, the Star-Advertiser used the occasion to print two large [and less than flattering] pictures of the Chief, one occupying most of the front page, and another inside.

Ian calls for the resignation of the chair of the police commission, and makes a compelling argument.


But what about the next chair? Can we be assured that a better choice will be made? Or does the selection process itself have to be overhauled? I suggest that we should do more. The system that makes appointments to boards and commissions also needs an overhaul.

In Hawaii, as in other states, ordinary people run for and are elected to political office. One might be a butcher, a baker, a candlestick maker, it doesn’t matter—you’re qualified to be a state legislator, a city council member, or a member of Congress, for that matter.

The same appears to apply to boards and commissions, but perhaps that should be changed.

Some board or commission positions are hard to fill, and so one can be grateful when a candlestick maker applies. But what then? Shouldn’t there be required training?

In other cases, shouldn’t there be qualifications, unique to each board? Should the governor (for example) be allowed free reign to choose, which could result in a political appointment made in exchange for past campaign contributions? On the federal level this happens all the time, as the Daily Show and others have pointed out. Ambassadors are appointed with no expertise in the country of their assignment—perhaps they’ve never even visited. We can’t do anything about that, but at a state level, we can make changes.

Would the University of Hawaii be better governed (for example) without political appointments filling those key positions?

Each board has unique requirements

Let me give an illustration of what I have in mind, based on personal experience.

I’m just your average candlestick maker, but I have worked in the area of disability for many years, and thought I could be useful on the State Rehabilitation Council. And indeed, I was appointed, after submitting my name to the governor’s person in charge of collecting names. And I was confirmed by the legislature, with a couple of recommendations, in fact.

But what then? Was I suddenly in a position of “authority” to “rule” over something? (Think of the Police Commission, the Ethics Commission, or the Campaign Spending Commission, which have real powers). No, not on a state rehab council. It’s all work, no authority.

I knew the work that they did in generality but didn’t actually expect what happened next. The Council provided training, in cooperation with the attached agency, Vocational Rehabilitation (VR). I had to study a fat notebook. There were discussions and the opportunity to ask questions and to hear guidance from the Chair, very experienced in VR matters. Then there was a half-day training in the Sunshine Law (open meetings, open records). And another half-day on ethics. Those trainings were conducted by the Office of Information Practices and by the Ethics Commission staff. The OIP training included a quiz to test our understanding.

The state rehab council has certain duties that it performs on an annual basis. Those were spelled out in another thick notebook, and when the time came, VR provided data such as current performance, budget, and so forth, that we would need to carry out our responsibilities.

So I’ve described to you a board that is designed to be functional. I believe, as a result of their attention to training and information gathering, they were able to do a good job. As new people rotate through the board, they will each be properly equipped for their assignment. I left the board knowing that my replacement would be similarly equipped to do the work required.

This should be institutionalized and individualized for each board or commission.

There appeared to be political interference, though, which is another aspect of boards and commissions in Hawaii that could be changed. Then-governor Linda Lingle declined to appoint replacements when board member terms were up, with the result that there was no longer a quorum. But the board members wouldn’t let her get away with it. Federal rules applied to that board as well, and they permitted board members to be carried over if necessary, in the event there were no appointments by the state. So the board did that, and effectively thumbed its nose at Lingle. Note that a structure that was in place protected the board against political interference.

What I’m suggesting is that we could put in place a regime of selection, training, and independence that would make each board more effective and assure the public that whether boards are made up of ordinary people or experts, those people are provided with the tools they need to carry out the people’s work—for that’s what they are doing.

Take the Police Commission (please!). How can we build a better Police Commission so that the situation Ian describes might be avoided? And ultimately, shouldn’t city councils and even state legislators be required to take appropriate training before assuming their duties?

And yes, I’d like the Sunshine Law quizzes city council members complete at the end of their training to be made public. Maybe they all should be made public.