Suppose Nate Silver is always right–then why vote at all? 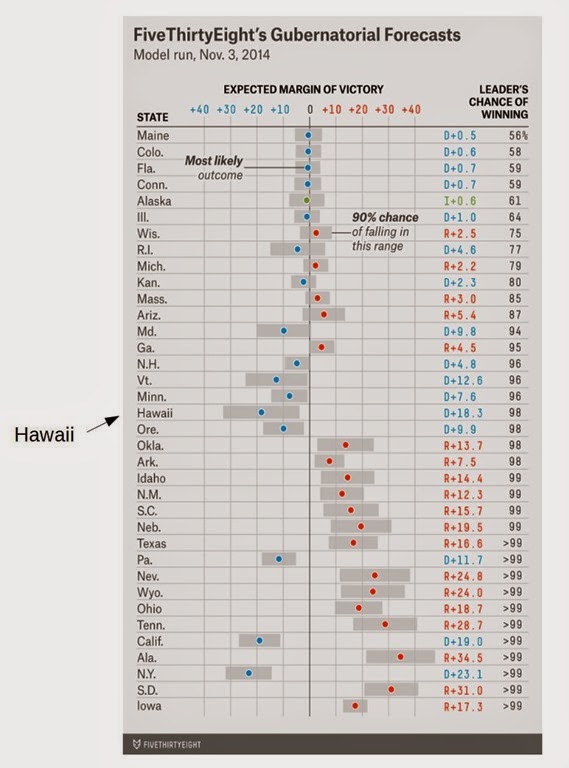 It seems paradoxical. But all one has to do while slaving away at a desk job today, is check the fivethirtyeight.com website to find out that David Ige is going to be elected tonight.

The only question is, by what margin?

The chart on the right shows that Ige has a 97% chance of winning according to the prediction. So it doesn’t matter much whether you vote for him or for Aiona or whomever.

So should I line up to vote? Nah.

The blue dot is the most likely outcome—in this case, 18.1% margin of victory for Ige, but the grey band marks the range of 90% certainty. So eyeballing that, the margin of victory could be from about 3% to about 32%. Of course, that’s a difference of just squeaking through to a major landslide.

So we don’t really know how much champagne will flow at Democratic Headquarters tonight, but it looks good enough to lay in a substantial supply.

So if this race is all I care about, might as well stay at my desk and catch up with the backlog.

If, however, at the other extreme, if most people did that, then how could a forecast be drawn? After all, the chart above depends on people voting as predicted. So looking at the prediction and then not voting would be problematic. Unless he figures that in. Nate Silver is sharp enough to do that.

I wonder whether having access to a forecast that is assumed to be accurate will discourage voters who favor the front runner from going out to vote (why bother? the candidate should win anyway, my vote is only one, doesn’t matter)? Will it encourage or discourage voters from casting a vote for a predicted loser (why bother, the candidate will lose anyway, my one little vote won’t change anything, doesn’t matter)?

As time passes, having immediate access to wearable computers may change election dynamics.

In the end, maybe we can all vote simply by clicking “like” on a web page (instead of filling in a box on a paper ballot with black ballpoint pen).