Omidyar in focus: the influence of big, big money on your vote

Oh, you don’t think you can be influenced by big spending on campaign ads? Chances are, any of us have been influenced and don’t even know it.

Tomorrow is election day, but many of us have already voted. Unfortunately, the timing of mandatory campaign spending reports is not helpful—the date is too close to elections. The votes are already in the ballot boxes.

What if the electorate had a chance to see who is trying to buy their vote?

The data is now out, and Pierre Omidyar has been outed.

Both Ian Lind in an article today, Omidyar makes the national news this week, but not so much locally (ilind.net, 11/3/2014) and Bart Dame in a comment posted this morning to Through a crack darkly: The Intercept, a billionaire, a controversy, many questions (11/2/2014) reveal that the Local Food Coalition, the folks pushing the Ag Bonds amendment so strongly, is 99% financed by Pierre Omidyar’s investment firm, Ulupono Initiatives.

[I don’t want to forget to thank Mike Reitz for pointing to this additional article on the First Look affair: First Look finds the hard part isn’t the journalism, it’s reinventing how a newsroom works (Gigacom, 10/30/2014) ]

So you thought that Local Food Coalition was somehow a grassroots organization? What gave you that impression? Perhaps their mailers? Or their flyer:

The diverse members of the group —from small and large farmers, ranchers, food manufacturers, agriculture supporters, to investors —feel the initial effort is gaining momentum with widespread support for more than a dozen proposals.

Ian Lind wrote in a Civil Beat article and his article linked above:

The Local Food Coalition registered as a ballot issue committee on September 9, 2014. According to the organizational report filed with the Campaign Spending Commission, its three officers all work for Ulupono Initiative, a private investment company created and solely funded by eBay founder and Civil Beat owner Pierre Omidyar.

In fact, its hard to tell the coalition apart from Ulupono. 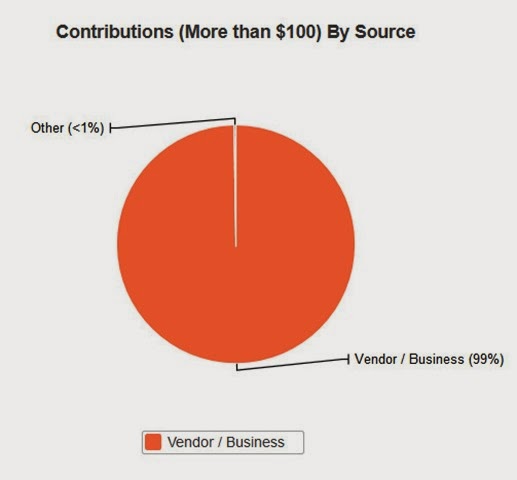 The 99% is primarily Omidyar’s money, and as you see, there is not much room in the crack for grass roots to grow.  A tabular breakdown looks like this (click for larger, more readable image):

The top three contributors are Ulupono Initiative, for a total of $500,000, and the rest is small change and cattle-company centric.

Ian also reports that The Omidyar Family Trust is the second largest donor to a campaign pushing for passage of the amendment to allow public funds to be used for private preschools (the largest donor is Kam Schools).

The other major donor to the Good Beginnings Alliance is The Omidyar Family Trust, which contributed $350,000 to the campaign up through October 20, according to the latest round of reports filed with the Campaign Spending Commission. The trust gave $250,000 in September and followed with another $100,000 in mid-October.

The Omidyar Family Trust accounted for 39.4% of all Good Beginnings Alliance campaign contributions, and together with Kamehameha Schools accounted for 95.8 percent of the ballot committee’s funding.

It’s unfortunate that voters learn this when many have already cast their ballots.

Also, how have we been manipulated in the past? I noted, when the change to an appointed Board of Education was on the ballot a couple of years ago, that there were many very expensive looking posters – made out of cut-out plastic letters on heavy white plastic sheets—in store windows and doors in Chinatown. Each one must have cost a pretty sum. But I could not learn at the time who was bankrolling that initiative.

What we don’t know can hurt us. Plus, I really hate being manipulated. “Local Food Initiative?” Is nothing sacred any more?

I agree Omidyar is an unusual actor, falling outside the normal, predictable categories. In addition to his meddling in Ukraine, which helped lead to an explosion of violence and regional instability, Pierre is meddling in Hawaii's elections through his semi-covert financing of public relation campaigns to push through two constitutional amendments on the ballot.

A lot of people are indignant about Dow Chemical, Monsanto, PRP and other corporate attempts to overwhelm our democratic process with a flood of money. But little attention has gone to Omidyar's attempt to buy influence with his money. And, despite the lofty pronouncements he often makes about "transparency," at least one of his groups has actively misled people as to the source of their funding.

Here is Pierre in the NY Mag interview:

"We’re really looking for new ways to bring more transparency and accountability to our government and to society as a whole.”

So why did Ulupono and its associates lie repeatedly about the so-called Local Food Coalition behind the Ag Bonds amendment? It was obvious there was Big Money financing their slick public relations campaign, so when online suspicions suggested they were being financed by the GMO companies, they said their funding came solely from the members of the coalition. It was only last Monday, when they filed their financial disclosure forms that it was revealed of the $505,250 raised by the LFC, 99% came from Pierre Omidyar, through his investment firm, Ulupono Initiatives. All three officers listed as officers of the “coalition” are employees of Ulupono. So this "coalition" is a wholly-owned subsidiary of Omidyar and his for-profit investment firm. An investment firm which is focused in three areas: agriculture, alternative energy and recycling. Fields which would stand to benefit should the constitutional amendment pass. Without the "transparency" he professes to support, how would voters be able to probe into Omidyar's potential conflicts of interest?

Being in the presence of great wealth tends to bend the thinking of regular folks, certainly including my own. Our hope that someone super-rich, like Pierre, might, if benevolent enough, be able to rescue us from our dilemma, help OUR side fight back against the evil concentration of wealth on the OTHER SIDE, maybe we should adopt an "Ends Justify the Means" attitude in evaluating Pierre's half-million dollar meddling in our election?

That appears to be the approach some people are taking.

Not only has his financial backing of the measure been deceptive, so too, has been the PR campaign his money has bought. We are being told the Ag Bonds Amendment (#2), will help "small," "local" farmers producing "food." But if you read the actual language, the beneficiaries are designated as "agricultural operations." There is no talk of "small" farmers as opposed to HUGE industrial ag operations. There is no requirement the companies be locally-owned rather than transnational corporations. And the benefits are aimed at ALL "agricultural operations," a much broader category than "food production." The most profitable agricultural operations in the state do NOT produce food, but produce GMO seed corn. This amendment is also being supported by bio-fuel advocates, who envision getting tax free bonds for planting bio-fuel crops.

The small, local farmers whose faces appear in the ads are those least likely to benefit from the issuance of these bonds, as their credit-rating is generally low, due to their inability to secure longterm leases on farmlands, which makes their business plans vulnerable to factors beyond their control.

The PR campaign is consciously dishonest. Pierre's model of social change, using a marketing firm to manipulate of public opinion, bears responsibility for that. You cannot finance a wholly-owned astro-turf operation and pretend it is a grassroots coalition.

Thanks for publicizing this. Unfortunately only a few voices started asking tough questions of the likely impact of this Ag Bond Con Am and we only started about two weeks before Election Day. By that time, many people had already voted and our questions had little time to circulate. Frankly, that appears to have been the plan of the Con Am's proponents. Try to slip by with no public scrutiny while manufacturing a superficial, reassuring narrative through expensive, well-produced PR.

I have little doubt, had just a few of us started looking into this Con Am even a week earlier, it would not have passed. As it was, their $500,000 budget, only managed to garner support from 50.2 per cent of the voters. Had it been kept at 50% or less, it would have failed.

Now that it has passed, there is an opportunity to work together to ensure the Legislature enacts laws and programs to implement the amendment in a fashion most beneficial to the actual small, local farmers we were told were the intended beneficiaries. And to oppose it being used to benefit the industrial ag companies who have replaced the old Big Five plantations as the corporations dominating both agriculture and our political process.

Passage of the Maui GMO moratorium initiative, in the face of an unprecedented flood of corporate money, as well as the re-election of Maui councilwoman, Elle Cochran and the survival on Kauai of Gary Hooser and Mason Chock and election of Kipukai Kualii, shows there is a strong distrust of industrial agricultural companies trying to run roughshod over the health and safety concerns of Hawaii's people, as well as a desire for genuine, local and sustainable food production.

So let's re-unite and work to ensure whatever the Legislature does regarding Ag in the upcoming session, reflects the needs of small farmers, agricultural workers, the environment, the neighbors, consumers and the overall health of Hawaii's people.

The conditions we find ourselves in, immediately after passage of the amendment, are good for coming together and isolating the industrial ag companies. Omidyar can decide which side he is on. As can the food justice organizations.