First case of police profiling of homeless reported in paper 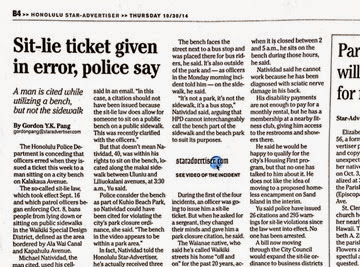 article buried deep in the paper this morning.

A houseless person sitting on a bench at a bus stop was singled out (profiled) by police and ticketed.

The so-called sit-lie law, which took effect Sept. 16 and which patrol officers began enforcing Oct. 8, bans people from lying down or sitting on public sidewalks in the Waikiki Special Design District, defined as the area bordered by Ala Wai Canal and Kapahulu Avenue.

Michael Natividad, the man cited, used his cell-phone to record the incident on video. In the video, two officers tell him he is being cited because "the bench is part of the sidewalk."

Aside from the serious issue of why a police officer who would consider a bench “part of the sidewalk” is employed by HPD in the first place, this reported incident represents a clear case of profiling. HPD was not reported to have cited anyone else for sitting on the bench.

Mr. Natividad was clearly chosen by police on the basis of his appearance. In other words, the city’s law was selectively applied to a homeless person while not enforced against others who used that same bench at the same or other times.