Here’s a claim that Hawaii might reasonably make for national leadership: It’s at the head of the pack in the current trend for lower and lower voter turnout. 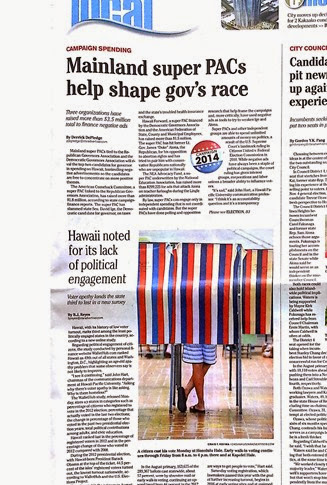 An article in yesterday’s Star-Advertiser reports that Hawaii is 49th out of 50 states and DC in political engagement, and credits that to “apathy.”

Perhaps they are right, but perhaps not. I’ve noted before that it’s easy to describe non-voting as apathy. But on what evidence?

Hawaii could simply be more advanced than the other states in this regard—that is, ahead, not behind the pack.

We’re always looking for a way to establish our leadership, to be noticed out here in middle of the Pacific. Perhaps this is one way.

Actually, those who have requested absentee ballots in Hawaii vote at a high rate by state or even national standards. Now, does that mean that they are less apathetic, or simply looking for the most convenient way to cast their vote? That could be laziness as well, couldn’t it. In other words, we know that absentee voters aren’t by and large absent, in fact one might say that they are very present. So they are simply making their voting routine more efficient by having ballots mailed to them, to be returned postage-free, with no parking problems or standing in line.

The Star-Advertiser article references this undated page on wallethub.com: 2014′s Most and Least Politically Engaged States. Check it out, there are enough graphs and charts to demonstrate that the author is very politically engaged anyway.

Although the Wallethub article attributes the decline in voter turnout to apathy and a lack of civic education, it also references What Affects Voter Turnout Rates (Fairvote.org). There seem to be influences that cannot be dismissed as simple “apathy.”

I don’t know why so few people here vote. I consider casting my vote to be a small thing I can do to try and influence government policy. But others may simply think, “What does it matter if I vote or not?” And that is perfectly valid. In fact, it may not matter. They could be on to something, give them credit for not wasting their time.

Hawaii chugs along. The potholes don’t get fixed, the condos rise from Kakaako. If developers and corporations are pulling the strings of government, it truly may not matter much who sits in a legislator’s seat. Senior citizens get killed in record numbers crossing the street regardless of who is in charge.

I’ve noticed that the executive branch, whether at the state or county level, often has disdain for the very public that put each of them in office. Public hearings required by law are held, but nobody is listening. The state agencies do whatever they want anyway, ignoring public input. Instead of working with the community to (for example) create housing for low-income or homeless individuals and families, government drops a bomb on Chinatown, or at least that’s how it might be felt. Surprise. We’re putting a low-income development in your back yard. Or here is a new city dump we’d like you to accept, or a wastewater treatment plant next to your school.

Regardless of who is in charge, who won the election, the people are treated as a problem. Citizens get in the way of government. We are pesky folks, not respected voters.

Of course, when the public does make itself heard, politicians listen. But mostly, people just seem to take what is dished out to them. They don’t march much. Protests are short-lived if they happen at all. We are not apathetic, though, as the push for marriage equality and the current struggle for GMO regulation show.

Without a proper study, I have no idea if I am headed in the right direction. I’m only trying to show that there could be reasons for not voting, perfectly valid ones. Instead of complaining, the newspaper and others might fund a study, perhaps, and gather some meaningful data.

Look, it could simply be “resilience.” Yeah, we pull through. We take what is dished out to us and survive despite it all. Voting has nothing to do with this, it doesn’t change a thing.

I often wonder why people don’t protest HECO’s electricity rates—we are paying about three times the national average, and the utility is clearly going slow on knocking down the price. While the newspaper likes to claim we are “leaders” in solar technology, actually, we were so far behind that when prices for panels dropped and the tax credits were created, we raced to catch up. The high growth rate in solar installations is simply that catch-up from behind, not something to crow about. And if you read the papers, that growth has stopped anyway.

Yet there are no pickets surrounding HECO headquarters on Ward Avenue.

We pull through. We pay and we survive to pay another day.

We stay and hope for a better day, waiting for public officials to do their jobs the way we wait for shameless husbands to come home and suddenly love us.

But day after day, those who are supposed to support us steal our wallets instead.

That’s a great article on resilience, which may apply in part to Hawaii.

Rather than “the audacity of hope,” the article describes the futility of hope.

Yet the Filipino people pull through. So do we in Hawaii, where the cost of living is among the very highest in the country. It’s tough. Even though we can vote out a legislator or even a governor, what difference does it really make?

The vote is a very poor change agent.

Whether or not we vote, our situation is not likely to improve.

So why vote? I’ve nearly convinced myself. Nearly.