“
Born this day: Jane Addams (September 6, 1860 – May 21, 1935) was a pioneer settlement social worker, public philosopher, sociologist, author, and leader in women's suffrage and world peace. In an era when presidents such as Theodore Roosevelt and Woodrow Wilson identified themselves as reformers and social activists, Addams was one of the most prominent[1] reformers of the Progressive Era.—Wikipedia
”

Jane Addams has pretty much disappeared from history (unless, perhaps, one 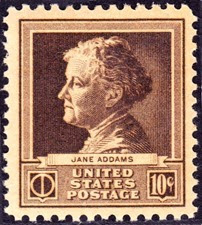 is a social work student poring over historical texts). She was born on this day in 1860, and her work and the example of her life lead to the founding hundreds of settlements including Palama Settlement in Honoulu.

She was founder of the American settlement house movement, disciple of Lincoln, Tolstoy and Gandhi, social and economic reformer, labor unionist, feminist, suffragist, pacifist, internationalist, ethicist, founding board member of the NAACP and the ACLU, advisor to eight U.S. presidents, Nobel Peace Prize laureate and prolific author and public speaker.

I urge you to click on the link and read more about this remarkable person. Another snip, to prepare the ground for the leap to Palama:

America’s cities by the late 19th century were cauldrons of social and economic injustice to factory workers, immigrants, women, children, African-Americans and non-Protestants. In 1889, inspired by a visit to Toynbee House in London, Addams and her friend Ellen Gates Starr rented a pre-Civil War mansion surrounded by tenements on Halsted Street near downtown Chicago which they named Hull House.

Their goal: “To provide a center for a higher civic and social life; to institute and maintain educational and philanthropic enterprises; and to investigate and improve the conditions in the industrial districts of Chicago.”

The “business plan” for Hull House was to recruit educated and idealistic young women — like Addams and Gates themselves — who would agree to live at the house for substantial periods of time as volunteers to work with and befriend the immigrants living in the surrounding neighborhoods.

Hull House was quickly replicated: By 1900, there were more than 100 settlement houses in the United States, which doubled by 1905, and doubled again to 400 by 1910. Many leading women reformers of the era were associated with Hull House including Florence Kelley, Julia Lathrop, Dr. Alice Hamilton, Lillian Wald and Frances Perkins, Franklin D. Roosevelt’s secretary of labor and first woman cabinet member.

Moving rapidly, now, we arrive in Honolulu just after thousands of Chinatown residents were rendered homeless by the government’s misguided effort to burn out the deadly plague. The Great Chinatown Fire of 1900 burned out of control, forcing many of the now homeless into slum conditions in the Palama community just Ewa of Nuuanu Stream.

The definitive history of the Palama Settlement itself may be The Progressive Era and Hawai'i: The Early History of Palama Settlement, 1896—1929, The Hawaiian Journal of History, vol. 34 (2000), pp. 169-184. The pages are downloadable here.

I dove in to learn more about the transformative work of James Arthur Rath and his wife, Ragna Helsher Rath, who were encouraged by Dr. Doremus Scudder of the Hawaiian Board of Missions to relocate to Hawaii from Springfield, Massachusetts, to begin the work of forming a settlement house on Jane Addams’ model.

A key event of the day was a presentation given by Rath at the YMCA on January 18, 1906. Journalism back then appears to have been somewhat like journalism today in that a reporter with bias or blinders on sees and reports through the filter of their biases. An unknowing readership can be easily taken in. In following the trail laid out in the article, I found not one but two identical articles describing Rath’s talk. That is, an article in the Hawaiian Gazette identical word-for-word to one in the Pacific Commercial Advertiser of the same date. It’s not very long:

J. A. Rath, Superintendent of Palama Chapel, addressed the Thursday Club last night on the subject, "How the Other Half Lives.

The speaker discoursed on the condition of affairs existing In the tenement quarters Ewa of Nuuanu Stream, and characterized it as terrible and discouraging. He said that drunkenness, the social evil and gambling were playing havoc with the natives and that the law in the district was being openly defied.

The condition of affairs was worse today, he remarked, than be had ever known it to be. Drunkenness was on the Increase, girls were being ruined, lodging houses were used for immoral purposes, liquor was given women in saloons, soda water stands were used a« places of assignation, gambling was rampant, obscene pictures were openly exposed for sale, and drunks came staggering out of saloons that had only bottle license.

At the conclusion of the lecture which was illustrated by charts, many questions were asked by those present and a vote of thanks was tendered the preacher.

Perhaps unhappy with that account, Scudder wrote his own report that appeared as a letter-to-the-editor in the January 20 paper:

Editor: Advertiser: Last night the Thursday Club at the Y.M.C.A. listened to such a remarkable address by Mr. James A. Rath of Palama, that it occurs to me to beg the use of your columns for a word with reference thereto. The title of the lecture was, 'How the Other Half Lives,' and it is no exaggeration to say that the disclosures made were of unusual timeliness and importance to all our citizens. Trained under the able corps of social scientists in the Springfield School, Mr. Rath has taken up the study of Palama on the line made famous by Charles Booth in his epochal volume, Life and Labor of the People of London. This investigation has been pursued at odd times when the stress of work has permitted, and is hardly more than begun. Yet the facts already ascertained form a most valuable contribution to the stock of material available to students of social conditions in this complex community.

The first thing that attracted the attention of the audience was a social map of the entire district showing in colors the abodes of the people of the several nationalities therein. Thus at a glance one could gain a fair notion of the distribution of populations. On this map the various saloons, cold drink shops, restaurants, hotels, barber shops, bathing establishments, schools, missions and the like were all appropriately indicated.

After explaining this charted work, Mr. Rath entered into a discussion of the life of the various peoples, finally taking up the crucial question of how they spend their leisure time. This led to a most discriminating exposition of the influence of the various recreational and lounging centers of the entire district. The influence exerted upon the people by each group was carefully set forth. Of course, Mr. Rath did not use the Advertiser’s headline that “the devil owns the town.” The black spots were not painted any other color nore were the bright places toned down. In fact the address glowed with optimistic hope and paid a warm tribute to the Hawaiians in Palama who are fighting for better things.

The drink evil, gambling and social vice were not glossed over. Perhaps the saddest part of the story was that which dealt with the way in which the portion of the town Waikiki of Nuuanu Stream  preys upon Palama for its own darker pleasure. It was clearly shown what a menace this and the other evils are to our city and especially to the people who dwell in Palama. This recital given with the calm details of facts elicited by many hours of patient investigation was startling. But it was offset by the exposition of forces in the district making for better things. It is to be regretted that a large number of our business men could no have heard this address, one effect of which was to cause all who had the privilege to rejoice that so resourceful and devoted a social worker lives in the very center of this district. In fact the so-called Palama Chapel which occupies the strategic spot in this the storm center of our city's social problem is a good deal of a misnomer. It is in reality a modern social settlement of the highest type and as soon as our financial leaders realize how it holds the key to the situation, in what excellent hands it is and how splendidly it is helping to solve the problem it faces, there will be no trouble in enlarging and equipping it to the wide work demanded. DOREMUS SCUDDER

Rath was applying the principles of Addams’ Hull House right here in Hawaii. Were those of us familiar with Powerpoint presentations thrust back in time to that evening at the YMCA, we might find ourselves in a familiar environment of data and analysis used to form the basis of sound social policy.

Addams clearly defined the model: impeccable research used to define appropriate social action. From the gazette.com link at the top of this article:

Her cadre of young women mapped housing and sanitary conditions in the Halsted Street area that was published as Hull House Maps and Papers in 1895, a pioneering exercise in sociology and urban geography. Addams used the maps of filth and uncollected garbage to shame the mayor into appointing her as garbage inspector for the 19th Ward.

Even today, when we face a far different set of social problems, it still seems reasonable to ask ourselves, “What would Jane Addams do?