A settlement agreement was filed today in federal court in the case of (de) Occupy Honolulu vs. the City and County of Honolulu, over the alleged illegal seizure of personal property by the City.

As with many similar agreements, there is no admission of wrongdoing.

Reading the agreement brings no sense of the magnitude and expense of the actions it disposes of. 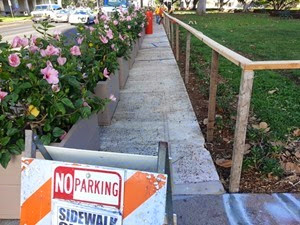 sidewalks around Thomas Square Park, ultimately blocking off the sidewalk by restricting its width with concrete planters on both Beretania St. and S. King St. from Ward Avenue to Victoria St. 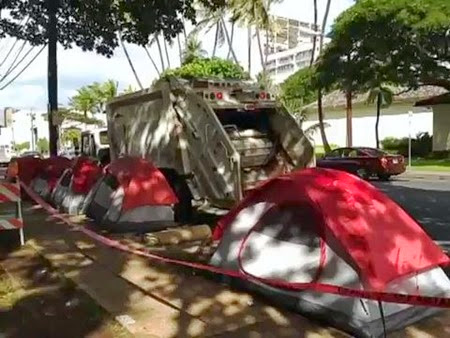 Numerous photos and videos documented raids at which the City disposed of personal belongings into garbage trucks, in violation of its own ordinances. During the course of the lawsuit, although the city continued to bring garbage trucks to the raids, it could not use them without violating court orders.

Although there is no admission of wrongdoin, the agreement calls for a payment of $1,000 to be divided among the individual plaintiffs and the return of their property held by the City, and allows for the possibility of payment of attorneys’ fees, subject to court approval and appeal.

While $1,000 is not a considerable sum, the attorneys put in many hours of work on this case, and at prevailing rates, their fees would greatly exceed the value of the settlement.

Who “won?” You figure it out. The repeated raids made little sense and cost taxpayers far more than the litigation.

Perhaps, now that the case has settled, since Thomas Square is a historic location, a brass plaque might be affixed to one of the planters explaining to future generations that this Honolulu “Stonehenge” was erected in frustration after a punitive, arguably illegal, and ultimately unsuccessful attempt to dislodge what was at that time likely the longest Occupy encampment still standing in the country.

A copy of the agreement appears below. This is an unofficial copy, do not rely upon it.