“Insanity: doing the same thing over and over again and expecting different results.”--Albert Einstein, (attributed)

According to Doug Matsuoka, who has been a chronicler of the Honolulu (de)Occupy movement, today’s raid on the Thomas Square encampment was #55. It was also the first raid under the court approved agreement resulting from a lawsuit filed by Occupiers earlier this month.

It appears, though, that the city can’t shake its obsessive-compulsive behavior, which is costing taxpayers unnecessary expense. Although the stipulated agreement prohibits the city from violating its own ordinance by crushing confiscated possessions in its garbage trucks, they brought along the garbage truck and 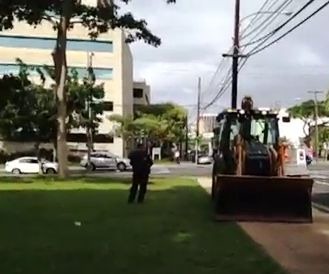 a front-loader anyway. At this point, after 54 previous raids, parking the front loader on the sidewalk nearby can’t be intimidating to anyone but casual bystanders and tourists. It’s been a regular visitor to this spot.

This pic is from Doug’s video of today’s raid, available unedited on YouTube.

The number of trucks and personnel arrayed on Beretania Street was astounding, considering that they could not take away more than a few signs. Toward the end, perhaps out of spite, they took the chairs that people were sitting on. Whether those chairs were legally taken or not, I’m not sure, since no tags were visible in the video, though the tags might have been taken off. They also netted the possessions of a homeless person not affiliated with Occupy whose tent was there yesterday and taken away today. Note that the city did nothing to solve its perceived homeless problem by confiscating the few possessions this person had in the world.

The “tags” are notices required by the city ordinance. They are affixed to tents and other items. The city must then come back no sooner than 24 hours later and can only take the previously tagged items, logging them and storing them away to be reclaimed later. In effect, the city would be operating a free storage service for anyone who wants one. Just leave things out on the street that you’d like them to pack and store away for you. 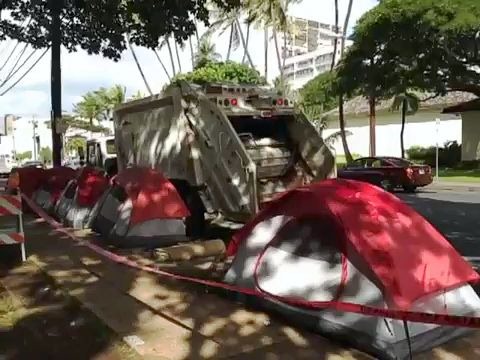 The garbage truck that they brought along could not be used, or they would be in violation of the agreement and subject to court sanctions in addition to damages.

Notice that all the tents in the image above are red. Also, note that they don’t have tags. So there is nothing for the army of city people to take away. When they came by yesterday to tag the tents, the tents were blue. Today the blue tents are gone. Now there are only red tents. Simple but fiendishly clever strategy, no?

So raid #55 netted essentially nothing. Nor will raid #56 (which is likely to be tomorrow) or raid #100. If  insanity is doing the same thing over and over again and expecting different results, then the city is out of its mind thinking it can beat both these experienced Occupiers and the federal court.

Each day they dispatch their army of trucks and personnel they waste taxpayer money. Of course, since the commercial media have been almost totally absent, the average citizen has no idea how their money is being wasted.

Tomorrow the tents will be blue. One day they might be yellow or black. Will the city just keep coming back?

I’ll close with another quotation which I think applies to Mayor Carlisle’s futile efforts so far to eradicate both Occupiers and the homeless from sight. This piece of wisdom is thanks to a dimmer government bulb, our former president George W. Bush:

"There's an old saying in Tennessee — I know it's in Texas, probably in Tennessee — that says, fool me once, shame on — shame on you. Fool me — you can't get fooled again."

Honolulu isn’t Tennessee, so apparently the city can be fooled any number of times. Tomorrow, around 10:30 or a bit later, it could conduct raid #56, and be fooled once again. Shame on Mayor Carlisle, shame.

Actually, there was some stuff that the deOccupiers had neatly stacked by the garbage cans that had been tagged and that was no longer useable. Stuff like broken chairs and what not. Those were left for City crews to take away. But those were left untouched! One person did report having a single bar of soap tagged!


I have to point out yet another expense to taxpayers - The dept. of facilities & maintenance has BROKEN/Destroyed many of the the sprinklers that were installed to water the trees & grass(are they also going to destroy the sidewalk by breaking THAT too?)when they bring these heavy equipments onto the sidewalk & grass. THEIR INTIMIDATION isn't working.