Since we pay about three times the national average for our electricity in Hawaii, you’d think that the city and state would have installed the most efficient systems possible on streets and highways. You’d be wrong. 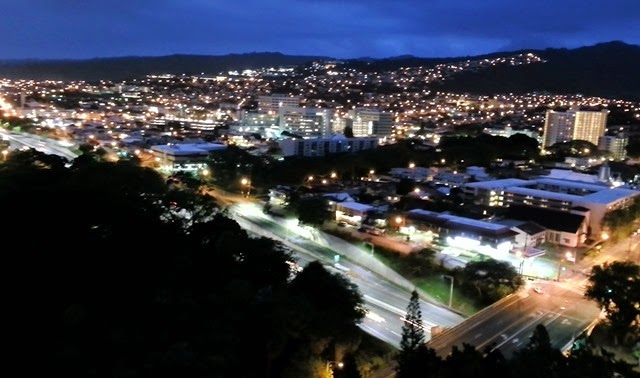 With profligate disregard for efficiency (and taxpayer money), Honolulu has ignored well-known design principles: city streets were lit with streetlamps that direct part of their light toward the sky. City parks direct light upwards and outwards besides downwards onto sports fields.

Sure, other cities used those same streetlamps, but they were not paying our rates for power. As to the sports field lighting, not only does proper design save money, it produces better results and doesn’t blast light into neighbor’s windows. Many municipalities prohibit “light trespass.”

We also have the special issue of protecting migrating birds that are distracted by upward-directed light and can be killed or injured as a result. 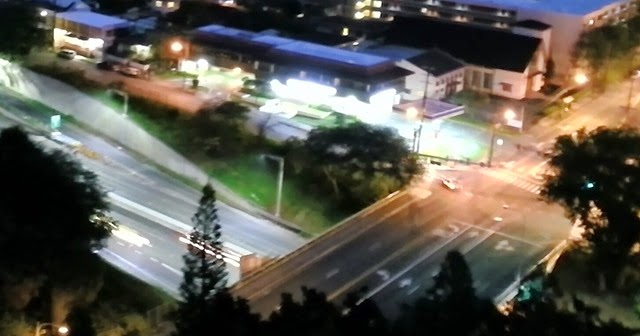 The photo above is a detail of the new lighting installed on the H-1 near the Nuuanu overpass. (Click either picture for larger). The little bit of vog or mist reveals that the light is directed only downwards—as it should be. At last!

Think of it this way: as the city illuminates the stars at night, it steals money from your purse or wallet in the closet to pay for that waste.

I’ve written about this over the years, Finally there are some signs of hope.

This is a manufacturer’s illustration of how their stadium lighting is used. They might have sprayed some smoke or mist to make it visible.

Including energy-efficient lights in stadium design is not rocket science, the use of reflectors in sports field lighting goes back decades. 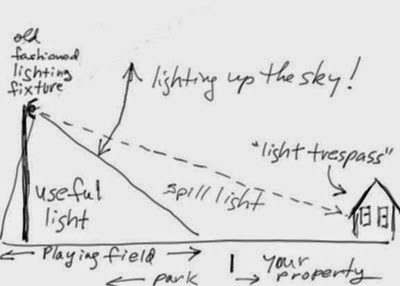 This sketch illustrates the problem of light trespass—caused by choosing the cheapest rather than the most appropriate light fixture for the job. 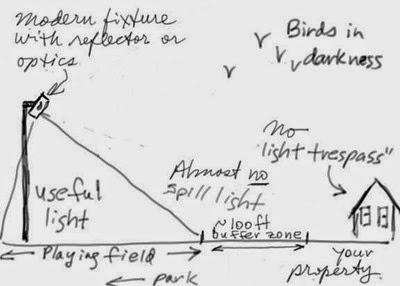 Here’s how it should be done.
Since we live on an isolated island in middle of the Pacific Ocean, most people do not have a standard of comparison. They don’t know how backward we are in terms of technology. 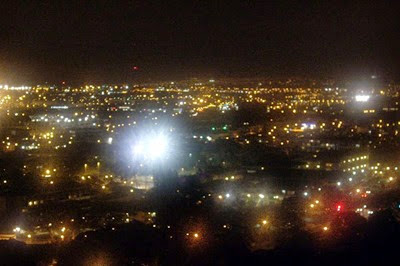 Here’s how our city still lights playing fields. The smartphone camera exaggerates the brightness a little, but compare with the highway pics at the top—we should see nothing from above. Nothing at all. All that light directed upwards over a nearby park is the same as money poured into the storm drains.

Technology—only for the birds on Kauai

On Kauai, the population of the Newell's shearwater, a migrating bird that is easily confused by skyward-directed stadium lights, had declined 75 percent in about a decade as lights were installed that failed to direct their beams only downwards.

The U.S. Justice Department said federal wildlife officials notified the county in 2005 its lighting was hurting the birds, in violation of the Endangered Species Act and the Migratory Bird Treaty Act. The government said the county failed to install shielded lights that shine down on the field, not out, thus being less harmful to the birds.

A deal was finally reached which required installation of properly shielded lights in 2011 (it took that long). Meanwhile, night football games were moved to the daytime, which didn’t work well for either players or fans—it’s just too darn hot to play football under the tropical sun.

Did our Department of Education or the County put the correct spin on it? While presumably in favor of science education, no, they did not. As a result, resentment built against the birds.

Meanwhile, island residents like Rich Rapozo warned that some people are talking about refusing to rescue birds they see on the ground in protest of the Saturday games.

"They chose the bird over our keiki," he said after a Saturday game, using the Hawaiian word for children.

Not only were the birds endangered by the County’s wrong choice of lighting technology, but tax money was wasted illuminating the stars. Of course, that’s not something that either the DOE or the county government wanted to own up to.

Better to keep the populace in ignorance.

Just as I was about to push the “publish” button on this post, Nanette alerted me to this article on Civil Beat, posted (today!) by City Councilmember Stanley Chang.

The article describes the city’s plan to install new LED lighting. Good for them, though suspiciously, the article states the city isn’t paying for it, it’s a “public-private partnership.” At the same time, the article Chang reports, the city has cut $80,000 in funding for new lights that he would like to have restored. This obviously calls for further research.

Actually, all cities will be using new LED lighting at least as replacements. To do otherwise would be the same as lighting one’s home with candlelight.

Chang doesn’t mention whether new LED lighting will be installed in middle of the sidewalks the way they did on Ala Moana Blvd. 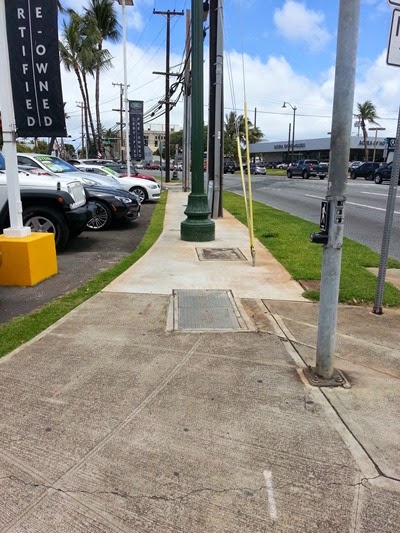 Now, when will they replace the wasteful lighting in parks, sports fields and schoolyards? 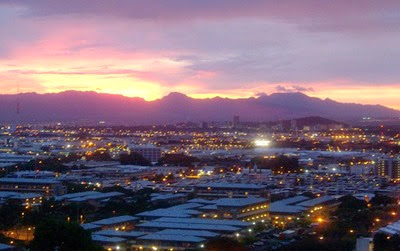