I posted a couple of articles on porous pavements recently, by way of highlighting technologies that you probably won’t find in Hawaii. Continuing on, here is another technology that we simply don’t seem to get, although it’s pretty common on the Mainland and has been for years.

What I will introduce today is outdoor lighting that doesn’t kill birds, that doesn’t trespass on nearby homes, and that saves us money.

We’ve seen the articles about migrating birds that become grounded and die due to confusion caused by upward-aimed stadium lights. There are no Newell’s Shearwaters left on Oahu, and on Kauai they are finally turning off the stadium lights to avoid killing them. Unfortunately, it took a lawsuit.  As you’ll see in Joan Conrow’s article,

Defendant also was aware that modifying or shielding lights so that they shine only downward significantly reduces this attraction and related takings. Defendant shielded all street lights under its control by June 2003 pursuant to an agreement with the U.S. Fish and Wildlife Service requiring it to do so, but did not shield lights at its Port Allen facility at that time.

Guess what—they don’t have to turn off those lights on Kauai. Basically, stadium or park lights don’t have to light up the sky at all. This is nothing new, and it’s hard to explain why Hawaii doesn’t seem to know about this. All they have to do is cut the light going towards the sky. It should have been designed that way originally.

As I look outside my window on any given night I can see the lights glaring in from several nearby sports fields. And I’m ‘way up high in a condo apartment. I shouldn’t see those lights at all. Not only is this “light trespass” but it is a huge waste of the city’s or the state’s electricity budget. Electricity isn’t cheap in Hawaii, so why waste it lighting up the moon and Alpha Centauri?

Here’s the scene in one direction outside my window. 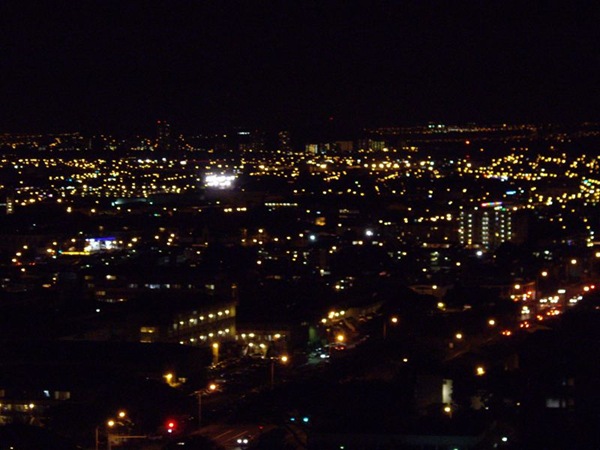 Zooming in, you can see each lighting fixture is shining up at me! 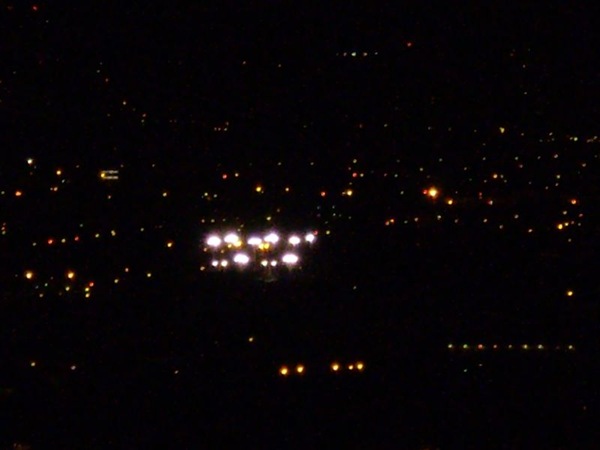 And that’s just in one direction. Looking around, I can pick out a couple of parks by the lights they are shining up into the sky.

Logic would tell you that what’s important is to light up the field, and that any energy going into the sky is wasted. It also kills birds. On Kauai, to solve the bird problem, they turned off the lights at night. No more night games. Why have lights if you can’t use them?

What they need, and what we need everywhere, are lights that only light up the stadium. Of course they exist, and they have been in use for decades. Here is a snip from the website of a manufacturer of lighting fixtures that illustrates the way it should be done.

Ok, let me sketch it out for you, and also introduce the concept of “light trespass.” I just drew this on the screen of my tablet PC. 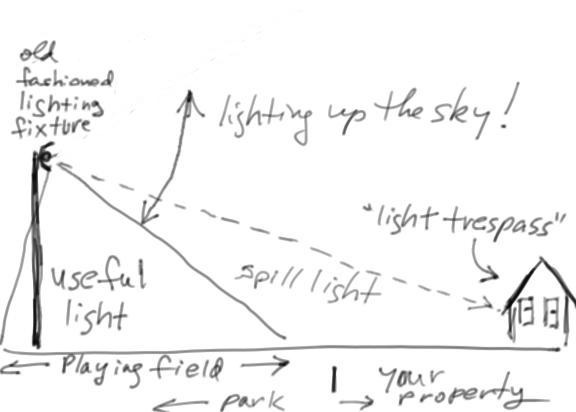 The use of cheap lighting fixtures means not only is the sky lit up but light intrudes into nearby homes. The area of useful light is actually a fraction of the total, and the rest is either wasted and also intrudes on neighbors. Cheap or poorly designed lighting systems waste taxpayer money as well.

Light pollution exists in three forms: glare, light trespass, and sky glow. Glare is the bright direct light created by poorly aimed fixtures, most commonly affecting players and fans. Light trespass refers to the light that spills outside of the boundaries of a sports field and illuminates neighboring yards or houses. Sky glow is light that travels up and illuminates the sky instead of the field, making it difficult to see stars.  [Field of Beams, 4/1/2003]

What is “light trespass?” Many municipalities have ordinances with language something like this:

“Light trespass” means light emitted by a lighting installation that falls outside the boundaries of the property on which the installation is sited.

The ordinance would typically specify the exact limit on spill light falling outside the boundary of the park or other area. For example:

These snips are from a sample statute. Counties in Hawaii could usefully adopt something similar. 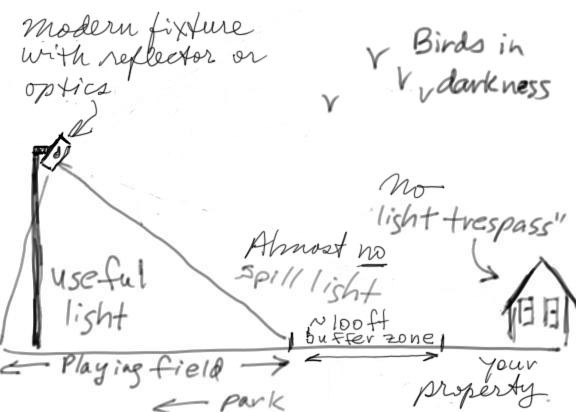 New state-wide or county-wide ordinances do not have to be invented from scratch. There are sample ordinances, laws to research and perhaps copy, and both standards and codes that can be adopted. Here is handbook explaining the process of implementing these ordinances. Lighting engineers are familiar with the literature.

So we don’t have to kill birds to enjoy outdoor sports after dark. We can also save the electricity wasted by lighting up the sky, and we can end annoying neighbors with light trespass.

Let’s get with the technology, folks. How to begin?

We need to use technology ourselves before we can claim leadership

There’s a pattern here, but one that can be overcome. The first task is to overcome the technological isolation we seem to be trapped in. The state could use a Chief Technology Officer.

When I worked for GE Information Services, there was a technologist on staff. His job was to check that GE (not just our division necessarily) was in tune with developments around and outside the country.

When I worked in Japan, I visited the labs of Sony, Fujitsu, Hitachi, NEC and others for the same purpose—and to help make sure that my company would align itself with the appropriate partners in any given emerging technology.

What I’m suggesting, then, is that if DBEDT still has illusions of Hawaii becoming a technology leader, or even if it doesn’t, it might emulate the GE example. That is, hire someone to make sure we are aware of an making use of modern technology, whether it’s energy, infrastructure, electronics, information technology, or whatever.

We need to step up to the plate in so many ways that it will take a special effort. We need to close our ignorance gap. Step one is to recognize that we have one. Step two may be to reform DBEDT. I don’t necessarily know all the steps to get there, but isn’t it about time we got ourselves moving in the right direction?

I found your post while researching more information about light trespass. I am one of the probably thousands (millions?) of people affected by inefficient lighting -- my neighbor's floodlights (how typical). Anyway, your idea is of course outstanding. Why aren't more good, simple ideas implemented?