Three bills aimed specifically at Hawaii’s homeless population are scheduled for their last hearings before possible passage tomorrow at 10 a.m. in room 016 of the State Capitol.

If you were thinking of submitting testimony, better hurry.

HB2409 criminalizes falling asleep at a bus stop. Make no mistake about it, the cops will not charge a businessperson napping next to his briefcase or a UH student snoozing off against her knapsack. The only ones charged with disorderly conduct (what can be less “disorderly” than sleeping?) will be the homeless. If this bill becomes law, it will be used to punish the homeless, that’s all. I also can’t imagine the cops hauling away grandma if she nods off while waiting 45 minutes in a warm breeze for her bus. Yup, only the homeless will be made to suffer. 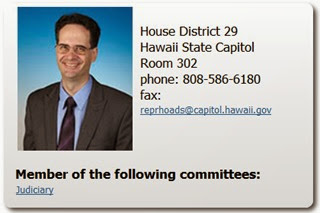 The bill has surprisingly attracted almost no testimony so far. Please send in yours today–it’s easy! Just click on the “Submit testimony” button at the upper right of the linked page.

This great example of “aloha” in the “Aloha State” was introduced by Representative Karl Rhoads.  At least he hasn’t offered plans to go out hunting sleepers with a sledgehammer (as far as I know…).

HB1660, introduced by Representatives Rhoads, Brower, Nishimoto and Saiki, criminalizes not only homelessness, but could be easily used, should it 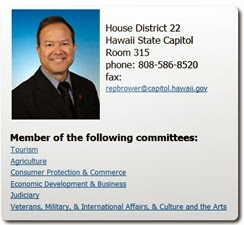 (1)  A person commits the offense of obstructing if, whether alone or with others and having no legal privilege to do so, the person knowingly or recklessly [obstructs]:

(a)  Obstructs any highway or public passage[, whether alone or with others.]; or

(b)  Provides less than one meter of space for passage on any paved public sidewalk.

(2)  A person in a gathering commits the offense of obstructing if the person refuses to obey a reasonable request or order by a law enforcement officer [to move]:

(a)  To move to prevent [obstruction of a highway or other public passage;] or to cease any activity prohibited under subsection (1); or

(b)  To move to maintain public safety by dispersing those gathered in dangerous proximity to a public hazard."

Note that Honolulu has several substantial areas where simply standing on a sidewalk would obstruct passage to less than one meter. I’ve measured and documented sidewalks with only 31 inches of passage with no people at all.

So if the police want to arrest demonstrators, this bill would seem to give them a way to do it.

Hawaii (and the city of Honolulu) need to abandon their policy of punishing the homeless—it hasn’t worked, has cost taxpayers globs of money that could have been used to assist the homeless, and hurts both tourism and our reputation as the “Aloha State.” 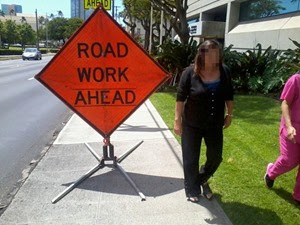 Finally, please note that the city regularly obstructs its own sidewalks. Will the cops arrest the city workers who do so? I doubt it.

Some pictures indicating the criminality of city officials that won’t be punished: 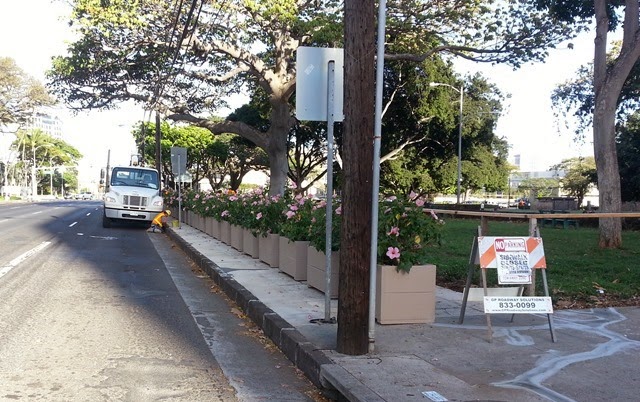 Here’s a whole sidewalk obstructed (at Thomas Square). Merely by walking on it, you’d be in violation. Or a cop could chase away or detain either a homeless person or someone demonstrating or holding a sign even though it’s a public sidewalk. 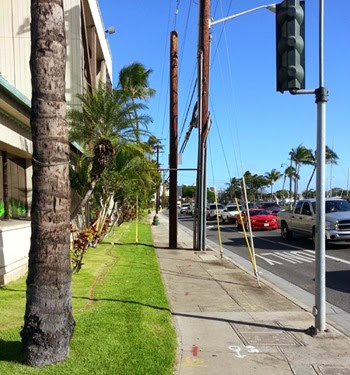 This ought to be against the law. Now, if only this is what legislators mean by “obstructing.” 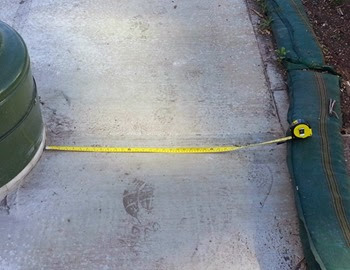 And this one—there’s not even a meter of sidewalk left to walk on.

The city violated its own “complete streets” ordinance by narrowing the sidewalks without consultation. While this seems remote from the topic at hand, it illustrates that obstructing sidewalks isn’t the real concern of this bill.

The third bill is HB33, which didn’t make it in 2013. It has one hearing this session—tomorrow, before the committee which didn’t hear it last year.

This bill criminalizes urinating or defecating on streets. One can feel a certain sympathy for it, if only there were public toilets provided—not only for homeless persons but also for residents and tourists. “No public restrooms” signs are ubiquitous, and of course it is not the business of restaurants to provide public facilities that the city should undertake.

The ACLU submitted testimony last year in opposition. A snip:

H.B. 33 is poor public policy because it fails to address the underlying causes of homelessness. Treating homelessness as a crime only exasperates the problem as punitive actions like this bill serve only to make the lives of homeless individuals more difficult. H.B. 33 will push people away from services and turn them into criminals (just for not having access to bathroom facilities), both of which make it more difficult for them to obtain employment and housing.

Rather than passing punitive measures like H.B. 33, we should look towards constructive alternatives to combating the underlying causes of homelessness and its consequences.

If only our lawmakers were listening.

Click the links. Have your say. Make a difference.

The city has a creative excess of ways in which to propose Bills and pass Ordinances that penalize people who are at the bottom rung of the socio economic ladder - homeless individuals and families. It is a lawful government responsibility to protect all residents equally and to provide adequate permanent shelter and housing. The prospect of the coming state HOMELESS BILL OF RIGHTS is not a deterrent to the city in its march to confiscate homeless people's belongings and move the homeless along despite their rights. In being a strong advocate for the homeless I do not support the Homeless Bill of Rights because it is disingenuous and humiliating - it has nothing in it to make a legal challenge to these city bills referred to in the article.

ACLU could as well admit that the 'underlying causes' of homelessness is a hostile prejudicial government, well that is a USA national policy, but in addition in the local region the maintaining of an unlawful occupation of some 120 years in Hawai`i is the relevant crime related to the epidemic of homelessness here.

Thank you for your comment. You've made several good points. I'd like to reinforce your points about the USA national policies -- they seem designed to force the general population towards deeper poverty. And yes, unlawful occupation is a major contributor to poverty, homelessness, poor health and more, in Hawaii. There is only one cure for it, but that is not likely to happen in the near future.


Correction: when I wrote my previous comment I was thinking these Bills were City and County proposals but to my shock they are state. I am glad to have found the place to give my verbal presentation - in opposition. Good to see so many opposed - I doubt any public speakers supported this.

I had to leave early before the votes were taken - how did it go?