Why lowball a living wage for Hawaii workers?


“
A national strike for a living wage and the right to unionize in the fast-food and retail sectors has spread across seven cities. Hundreds of workers walked off the job Thursday in Milwaukee, and before that in Chicago, St. Louis, Kansas City, Detroit, Flint and New York City. "What else do we have to lose? We are already slowly dying in our day-to-day lives," says our guest Terrance Wise, who works at both Burger King and Pizza Hut and is a member of the Stand Up Kansas City campaign. "So why not speak up, and stand up, and let the nation know that we are suffering? This is really a cry for help. This great nation should not turn its back on working-class people that need help.”—intro to Democracy Now segment, "We Are Slowly Dying", 8/2/2013
” 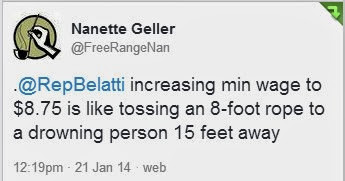 It’s still a tough economy in Hawaii, as elsewhere in the country.

Governor Neil Abercrombie’s State of the State message this morning offered his push to reduce taxes on seniors’ retirement incomes, a plan that could make a small dent in poverty in that demographic. He offered nothing for the homeless except a bill to increase the minimum wage.

While any increase in the minimum wage would be helpful, is a proposal to raise the minimum by only $1.50 from $7.25 to $8.75 starting one year from now adequate, given the high cost of living in the state? The Governor’s proposed increase appears to just track the rate of inflation since the current minimum was was established in 2007, but if the wage was inadequate then, it will still be inadequate in 2015. Plus, of course, workers will have been falling behind inflation up to that point. Bills that have to be paid remain to be paid.

Workers across the country have been clamoring (and demonstrating) for a living wage, that is, an income at least sufficient to pay the bills.

Walmart, employing 2.2 million people worldwide and the largest private employer in the United States, is also the best example of an employer paying inadequate wages:

Due to low wages and few benefits, Walmart workers at a single 300-person Supercenter store rely on anywhere from $904,542 to $1,744,590 in public benefits per year, costing taxpayers, according to a new report from the Democratic staff of the House Committee on Education and the Workforce.

That’s right—inadequate pay at Walmart means that you and I taxpayers are footing the bill instead of the billionaire owners. Walmart can well afford to pay a living wage to its employees.

State and federal minimum wage laws can help, but Hawaii should follow the examples of other states that have higher minimum wages, even where the cost of living is very significantly lower than ours.

The best comparison chart of state wage laws I have found on the web is in the Wikipedia. Another good comparison is on the USAToday website.

Washington State has a minimum wage of $9.32 and indexes it to inflation. Currently that is the highest statewide minimum wage in the nation. Note that the cost of living in Washington is lower than in Hawaii.

To its credit,  Hawaii became the second state (after New York) to implement basic wage and labor protections for domestic workers. California is now the third state that protects the rights of domestic workers, after a multi-year struggle.

Should Hawaii be targeting a $10-12 minimum wage?

In an election year, what would be wise for an incumbent governor or legislator, or for candidates, to propose? Will the people speak out, and how loudly?