… but not Hawaii. At least, not that you’d notice.

The City and County of Honolulu seems to have started talking about a Housing First program, but is not committing any resources to it.

Hundreds of cities and jurisdictions adopted plans to eradicate homelessness.

Some cities were more successful than others. See the article, and also these two from the National Alliance to End Homelessness:

Have the various plans worked? The Huffington Post says yes:

Creating a plan to end homelessness is a roadmap on how to literally end this sad human American tragedy by showing this country that we have the capacity to actually accomplish it. Whether our leaders, both locally and nationally, have the political courage to fund and implement such a plan is another issue.

Have these plans successfully created a path toward ending homelessness in this country? A resounding yes.

Well, what about Hawaii? Both the City and the State have appointed homelessness “czars”, but what is a czar without an army, without resources to move forward?

Any real plan must also include a system of goals and measurements agreed beforehand. It should identify resources and make commitments. Are we even on a “path toward ending homelessness” at all?

Can one say that Hawaii’s state and local governments have failed to solve the problem of homelessness when they haven’t even tried?

Governor Neil Abercrombie concluded his fourth State of the State speech before the Legislature just over an hour ago. He mentioned no new state resources to assisting the homeless move into stable housing. Although he announced plans to spend state funds on other programs, he did not describe spending anything on combatting homelessness.

This leaves those stranded by City policies at the edge of public sidewalks as they are, and means that the less visible homeless population will remain unassisted as well. It means that still more seniors and children will become sick or die due to poor living conditions.

Spending the $844 million state budget surplus must of course recognize priorities. Clearly, solving homelessness has no priority in state plans.

Of course, the responsibility is shared between the counties and the State, but neither has stepped forward with even minimally effective resources. In fact, Mayor Caldwell’s Housing First initiative, long overdue, may yet not be implemented due to lack of funding. At the same time, calculated based on his estimate, the City has likely spent between $1-2 million on cruel raids to confiscate personal property from sidewalk tents. These raids have proven ineffective.

What has the state committed so far? The Governor listed two items related to homelessness in is list of accomplishments for 2010-2013, posted on the state’s website:

It may be a cynical thought, but I’ve wondered often why the homeless need coordination? What they need is a real commitment to fund evidence-based programs. The Governor did not write or speak about any material commitment. Note also that the Council is “integrating” services provided by charities. Note that over the four year span of the Governor’s report, that’s all he says he has done.

In other words, over four years, the state and city have visibly committed one person’s salary each. If there is more, it needs to be documented, reported, and measured against the need. Task forces, coordinator’s salaries and meetings don’t count.

If there are programs in place, there need to be measurements and reports. Find them if you can.

Media focus on visible blight instead of solutions

Our media have placed few demands for solutions on either city or state government, instead focusing on the “unsightliness” of people living on the streets of Waikiki or blocking the sidewalks they have been forced onto by city ordinances. A lead article in Sunday’s Star-Advertiser (see below) encouraged the position that rich folks are allowed to buy alcohol in ABC stores but that those living on the streets should not also be able to do that.

The newspapers are documenting a tragedy in motion. The sight of these people makes news, and the paper is willing to publish any number of unkind letters to the editor. Will focusing on uncomfortable views of those in need spur either the state or city to positive action? Why not write about our governments’ inaction?

So far, local media have declined to investigate government (in)action, as highlighted by coverage of as-yet uncharged sledgehammer-wielding state legislator Tom Brower. One might conclude that those living without roofs over their heads in Hawaii don’t have even the minimal protection of the law. National and international media were more critical.

Some crises come about by accident—and others by design. Some situations arise inadvertently, and others are created purposefully. Homelessness in Hawaii has been created perhaps by economic forces operating on a national scale, but it has been exacerbated by state and local government inaction. Through harmful legislation, our state and local governments have, in fact, created the problem that the newspaper reports is bugging people. 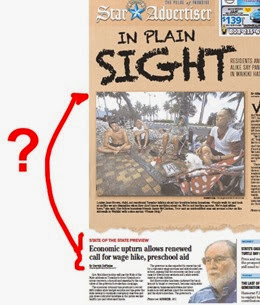 This is a snip from Sunday’s Star-Advertiser front page. Note the large spread given to an article emphasizing the discomfort of having to look at those who have been marginalized to living at the edge of sidewalks.

For the record, I’ve spoken to several tent-dwellers, and each said that living right next to traffic on the streets is not a personal choice. The City has forced them there, and even the numerous raids (probably numbering in the hundreds by now, at considerable taxpayer expense) cannot dislodge them because there is no better place to go.

What caught my eye is the contrast between the lead article and the one underneath it, headlined “Economic upturn allows renewed call for wage hike, preschool aid (Star-Advertiser, 1/19/2014). The state is running a reported $844 million budget surplus. Will the administration spend more than a dime to assist the homeless people it can’t stand the sight of?

The Governor mentioned some of the items that the writer speculated might be included in his message, but offered nothing new on homelessness.

Raising the minimum wage will assist many families now unable to pay rent and buy food, permitting some to move into rental situations and keeping others from falling into homelessness. Note that raising the minimum wage does not toll the state budget. In fact, through somewhat increased taxation, it should contribute. However, in the absence of a regime of rent control or rent stabilization, rents continue to rise, and the phrase “affordable housing” as used in the media is like some kind of joke that journalists keep hoping we’ll get if they simply repeat it often enough.

Supporting an increase in the minimum wage is important for many reasons, but it is not a state commitment of resources to combat homelessness.

City Housing First initiative may be only talk

The City has failed to put any resources into its Housing First initiative. Recent news article revealed that the city investment is zero—the money is to come out of the sale of public housing to a private developer, and if that falls through, which is a possibility, that ends it.

Note also that Mayor Caldwell planned to assist only 75 people into supported housing. By any measurement, that would be an inadequate response even should it be achieved.

The state has responded abysmally in similar situations—think Felix (special ed) kids denied an education in the schools, deficiencies in both child and adult mental health services, conditions at the State Hospital and in the prisons, Think Micronesians who were abruptly cut off from health care, and those living with handicaps who were cut out of Quest.

In each of these cases it was the federal courts that maintained the rights of the disadvantaged, not the state acting in a responsible, legal or moral manner.

[A federal government grant of $2.1 million was announced in July, 2013, to aid veterans and would be administered by charitable agencies. Later news coverage suggested the grant (the same money?) will benefit only 45 people and be used by the Department of Health, starting in 2014. Note: only $2.1 million committed, and by the feds—not by state or local governments.]