“We should pray for the homeless men and women in Hawaii. Being without shelter is not only an indignity and hardship but compounds just about every other adversity that can befall a human being.

However, we should pray even more intently for the men and women, like Brower, who are infected by hatred for their fellow man. If there is one affliction even worse than being homeless, it’s living inside the self-made prison of hate.”—Joe Carter, Action Institute, 11/20/2013

Yesterday the news about Hawaii’s state representative Tom Brower’s vigilantism spread across the country and to London, today Google finds coverage all over the world. It’s sensationalism in a bad way, and doesn’t help Hawaii or its homeless citizens.

If any good comes of it at all, perhaps it will nudge the state into putting in real resources to benefit (rather than persecute) its homeless citizens. The city (Honolulu) may be a lost cause, as it has persistently waged a war against its homeless, including night raids resembling the military actions in Iraq more than compassionate aid. 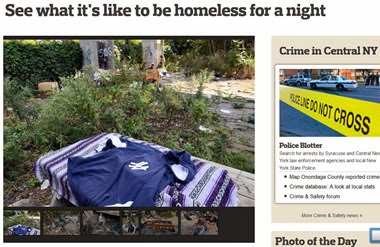 At least one article (Gawker, see below) noted that news of Brower’s action in Hawaii broke during Hunger and Homelessness Awareness Week.Potential tourists around the world are seeing articles in their local papers. There were articles from Canada, San Francisco, New York, UK, Russia (english), UPI odd news, Fox News,  CNN, Salon.com, Courthouse News Service, and much more (what a gift to Internet trolls all these articles must be) …

Here are a few that stand out for their language, if for nothing else:

The first snip below is, um, in the vernacular, so isn’t typical, but it’s a popular website, so the damage is done:

What the everloving fuck, Hawaii? You are so cool! You are HAWAII. Prezzy Bamz was born in you! You were multicultural before multiculturalism was Satan’s immigrant basket!
…
At least, everybody is mellow and high and gets along except this state representative — AND DEMOCRAT — Tom Brower, who has been going around smashing homeless people’s fucking meager belongings, because of how homeless people are “disgusting” and he is going to solve the problem, WHAT!
…
We don’t have much to add to this because of how our brains ESSPLODED all over our keyboards — except to add that for once (ONCE) you can read the comments at HawaiiNewsNow and not want to napalm yourself or the rest of the entire human race.

[Wonkett, Hero Hawaii Democrat Going Around Smashing Homeless People’s Stuff, Because They Are ‘Disgusting’ — Wait, What?, 11/19/2013]

Ratcheting down the rhetoric only a bit, but still casting Hawaii in a bad light:

Hawaii State Representative and general scumbag Tom Brower has been prowling the streets of Honolulu with a sledgehammer, searching for the carts that homeless people use to store their belongings, and smashing them, in what he calls a quest to “clean up the streets.” Clearly an advocate of the “out of sight, out of mind” approach to society’s problems, Brower has also made a habit of waking up homeless while they’re sleeping and telling them to go somewhere else.
…
Sadly, Brower’s approach to tackling the homeless problem is indicative of Hawaii’s as a whole. The state has a higher percentage of homeless in the country, but has opted to solve the problem not by increasing funding to mental health clinics, or encouraging low-cost housing development, but rather by offering the homeless a one-way flight out of the state.

Google detected many other websites reporting the news, some with factual coverage based on local Hawaii reporting but with headlines such as Insane Hawaii State Rep. Tom Brower Smashing Homeless Shopping Carts With Sledge Hammer. Others added opinion to the news:

In the past two weeks residents in Hawaii noticed what appeared to be a crazed individual carrying a sledgehammer through the streets of Honolulu, a state lawmaker looking to rid the city of homeless people by targeting their belongings.

[OpEdNews, Hawaii lawmaker wages campaign against the homeless and their belongings with sledgehammer, 11/19/2013]

Working our way through tamer mainstream coverage, most were simply based on HawaiiNewsNow, KITV or Thinkprogress articles:

"If the sum total of a person's worldly possessions can fit into the cart and you now grab it and say, 'I'm taking it,' it doesn't take a lot of imagination to figure out how that could escalate quickly,"

"His message to the public is that it's okay to commit acts of violence against homeless people, against vulnerable people. It's okay for vigilante justice,"

and some tweets, including this one

@jesseltaylor right? I don’t understand the cruelty. Any number of responses would have been more helpful

The popular website Gawker relied on screengrabs from KITV for its article, Lawmaker Says Violence Is the Solution to Homeless Problem (11/19/2012).

Fortunately, Brower gets only the proverbial 15 minutes of fame. These articles will be forgotten in time, though Google never forgets. Anyone looking for a Hawaii vacation may run into one or more during their search.

The damage is done.