“The Tom Browers of the world dominate our politics like a pack of rampaging Robin Hoods in reverse, robbing from the poor and the needy and the sick to profit the rich and the powerful.”

The fact that there is a lack of aloha in the “Aloha State” government leaked out to the national media today. Websites of national circulation and tweets have revealed how we treat our homeless citizens in Honolulu. For this, we can thank (?) Rep. Tom Brower.  I have to say that I did not know this about Rep. Brower, who always seemed to me to be a level-headed and responsible guy. 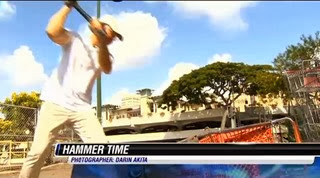 But Rep. Brower broke into the national news today, spreading shame on Hawaii.

Much like Batkid, Hawaii has found its own superhero. Except that instead of protecting the powerless from harm, he roams the streets with a sledgehammer and looks for homeless people in order to literally smash their possessions.

Perhaps not so remarkably, Honolulu police have declined to stop Brower. It is possible that he has committed crimes, but the HPD is no defender of homeless people. They are participants in the raids that seize and destroy the possessions of those forced to live at the edge of the sidewalks by the City’s restrictive policies.

Uncontent to just destroy homeless people’s items, Brower is also on a mission to wake those he finds sleeping and tell them to sleep somewhere else. “If someone is sleeping at night on the bus stop, I don’t do anything, but if they are sleeping during the day, I’ll walk up and say, ‘Get your ass moving,’” he said.

Imagine that you’re asleep and are rousted by a guy wielding a deadly weapon (a large sledgehammer)? That could be considered assault (though I’m not a lawyer, just going by what I read in the papers and see on TV). Imagine if the person he awakened was a homeless vet with unresolved PTSD. The situation could easily escalate with possibly deadly consequences. Of course, it goes without saying that if there’s an arrest, it would be of the homeless person. Such is the state of policing in Honolulu, and the privilege of power.

Later today, Truthout.org sent a blast fundraising email. I think they expressed the essence of how Brower has embarrassed the state, if not himself:

There's a guy named Tom Brower in Hawaii who goes around with a sledgehammer smashing the belongings of homeless people to bits. He is "disgusted" by the homeless, doesn't want to see them, and is so proud of his actions that he happily allows himself to be filmed while swinging the hammer at the meager possessions of the most vulnerable people in our society.

Has he been arrested for this shamelessly sociopathic behavior? Will he be arrested at some point soon? Don't hold your breath: Tom Brower is an elected official, a state representative, and a Democrat to boot.

Something is badly out of joint in America. We are mired in a crisis that is not merely financial or cultural; it is a crisis of the soul, of the very essence of our basic humanity, and we are sinking fast. The Tom Browers of the world dominate our politics like a pack of rampaging Robin Hoods in reverse, robbing from the poor and the needy and the sick to profit the rich and the powerful.

They must be stopped, thwarted, and cast down. This must end, for all our sakes, and we must be the ones to put an end to it.

Since I’ve used their quote, please consider clicking on the link above and donating to Truthout.org. They are a very hard-working, truth-telling organization. Supporting people willing to say it like it is, is a good thing.

Yes, Hawaii has been embarrassed, but only because the way we treat our homeless has been revealed. It’s part of a larger fabric—neither the state nor the city government care at all for those who are disadvantaged, whether they are those who cannot afford the sky-high rentals, or special needs students who were totally denied services in the schools, or the conditions in our State Hospital or in the prisons. It’s sad that in each of these situations (except for the homeless) it has taken the federal government, the courts or the Department of Justice, to set the state, albeit grudgingly, back on the lawful and moral path.

Perhaps Honolulu’s treatment of its homeless citizens needs to be reviewed by a court to bring relief.

Tonight’s breaking news is that Brower has given up his vigilantism. Good for that. It saves advocates the trouble of seeking a TRO.

I guess the only thing he thinks that can get the good people of Waikiki out of fixating on his yes vote for same-sex marriage (or his own fixation) is to terrorize the homeless with a sledgehammer.


I'm not sure I see the connection, but news coverage has indicated that he has support in Waikiki.

If only people realized that the homeless tents are on the sidewalk because of city ordinances forcing people to live there. I have not met anyone who wants to live on the edge of a sidewalk.If his supporters knew that, and knew that state government could help resolve these issues but is taking little to no action, would they still support him?

I'm confused...how does cart bashing help solve homelessness? After the cart meets its violent demise, do the homeless suddenly give up their bad behaviors? Do they become hedge fund managers? Do they stop substance abuses? Do they become productive members of society?

Or do they just go get another cart?

This guy has hurt Hawaii badly by making us look like a cold, cruel community that cares deeply only about rich visitors. The antithesis of Aloha Spirit. I hope to hear his fellow representatives speak out against him and condemn vigilante action against a segment of our society that already is subject to unequal treatment and persecution.

Here's my take on it: the guy pandered to the folks who give him his campaign contributions. A quick check shows Brower's money comes from the American Resort Association and the tourism industry. In the run up to 2014 he made a high visibility public relations play to retain that support. But it backfired big time and the more compassionate side of Hawaii was awakened.

I'm sure Tom will miss walking around with that big hammer (geez, the symbolism burns) and I hope we soon miss seeing him in public office.


Brower's hammer methods may have been viewed by some as being cruel. Now for another view, why isn't anyone address these carts ? I live in an area that has a lot of homeless and these carts are a problem. Rattling late at night and predawn with bottles and contents tingling and clankin - not the best way to wake up. Are these belongings really theirs ? Or are they from the bulky items piles waiting to be picked up ? Have you seen the rubbish that is left by some homeless individuals ? Who pays for cleaning that up ? Can Hawaii be the haven for all homeless ? Ambulance, Fire Trucks, HPD roar down our street every night multiple times to service the sidewalk tent residents. Yes, every night, more than once per night. I feel for these people, but I can see how frustrating it can be when nothing gets done. Why do we keep building luxury condos ? When will our affordable housing by affordable by those in the median wage range ? Aloha is a two way street. I don't blame Brower......


The annoyances you mention are common in every city. Homelessness is an urban problem--people cannot survive easily in rural or suburban areas. When we lived in Manoa it was absolutely silent at night. Not so here in town.

What might help is sincere efforts by government to provide evidence-based assistance like Housing First. Other municipalities undertook their "End Homelessness in 10 Years" campaigns over a dozen years ago, but not Honolulu. We haven't taken the steps that would reduce the clanking and the ambulance sirens that you mention.

And yes, there are enough luxury condos. We need affordable rentals. Honolulu is a prime candidate for rent control or rent stabilization to help keep people in their apartments, and a higher minimum wage (or a "living wage") would also diminish the homeless population.

No, homelessness can't be "ended" in any number of years, but we could at least start working on it. And if we did, the noised you hear would certainly be reduced, at least.

i agree with the first comment that this was a stunt to rally support from a divided, older voter base in Waikiki that may have had mixed feelings about the same-sex marriage vote or at least Brower's own perceptions of the same. getting international attention as terrorizing the homeless (who the voters of Waikiki love to hate) is as good a distraction as any from potential voter dissatisfaction real or imagined.