I spent today attending the trial of Catherine Russell and Blade Walsh in circuit court. They are accused of obstructing government operations during a raid on their tents at the (de)Occupy encampment.

There’s a difference between the way lawyers think and the way ordinary people think. It’s part of the law school education. Elizabeth Mertz wrote a book on the subject—here’s a snip from the Amazon.com review:

She knows how all these schools employ the Socratic method between teacher and student, forcing the student to shift away from moral and emotional terms in thinking about conflict, toward frameworks of legal authority instead. This move away from moral frameworks is key, she says, arguing that it represents an underlying world view at the core not just of law education, but for better or worse, of the entire US legal system - which, while providing a useful source of legitimacy and a means to process conflict, fails to deal systematically with aspects of fairness and social justice.

[amazon.com, The Language of Law School: Learning to "Think Like a Lawyer"]

Catherine Russell explained, during testimony, that she was trying to protect her possessions. I would make a lousy lawyer, because I see that “fairness and social justice” are on her side, but in tomorrow’s instruction to the jury, the judge will no doubt rule out that kind of thinking.

Heck, the City had parked a dump truck ready to destroy forever what was put into its hopper, and the City had seized personal possessions including her medications and other items in many, many raids before. Russell is a plaintiff in separate cases in federal court alleging that her civil rights were violated under the Constitution.

Would it be fair if she and the other plaintiffs should win in federal court yet lose (and potentially be jailed) for defending their civil rights?

The ordinances and constitutional rights

H. Doug Matsuoka was a panel member at Monday’s Kokua Council 10th Annual Community Forum. I still need to post the forum audio on the Kokua Council website, but in the meantime, Doug’s short talk can be heard over on his SoundCloud page. You can listen from your desktop or smartphone. In just about five minutes he explains how the City’s ordinances criminalize homelessness in Honolulu.

I think his careful explanation was a revelation to some of those present in the large meeting hall. No wonder, since most of the press coverage treats the homeless, who have been forced to live on the sidewalk (no one wants to live on the edge of a sidewalk!), as some kind of pests to be eradicated. Do listen to his short talk: 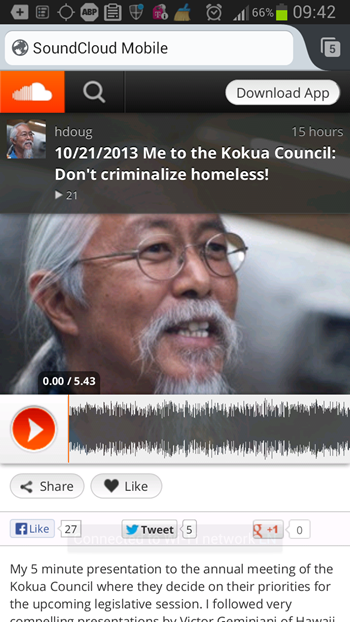 My 5 minute presentation to the annual meeting of the Kokua Council where they decide on their priorities for the upcoming legislative session. I followed very compelling presentations by Victor Geminiani of Hawaii Appleseed for Law and Economic Justice, and Allison of AiKea for raising the minimum wage. That's why you can hear me join with them on that subject before I present my opposition to laws criminalizing the homeless.

Doug’s talk was received with applause. Check it out.

Also, on DougNote, there is a petition to urge the City to stop the midnight raids on the houseless and (de)Occupy sites. My comment: the City has likely spent between $1-2 million, according to Mayor Caldwell’s own estimates for the cost of each raid—money which could have been better used to help the homeless rather that hurt them.