It takes a lot before Democracy Now covers news in Hawaii. Activists on Kauai have accomplished a lot, and were recognized with coverage of their efforts on today’s program.

Legislators on one Hawaiian island recently passed their own bill restricting pesticide use by companies developing genetically modified plants. Because of its location, Kauai has become a hot spot for new genetically modified crops, particularly corn, which is grown by companies including DuPont, Syngenta and Dow. But residents say pesticides from the fields are making them sick. Last week the Kauai County Council passed a measure that requires the companies to disclose which pesticides they use and establishes buffer zones around medical facilities, schools and homes. 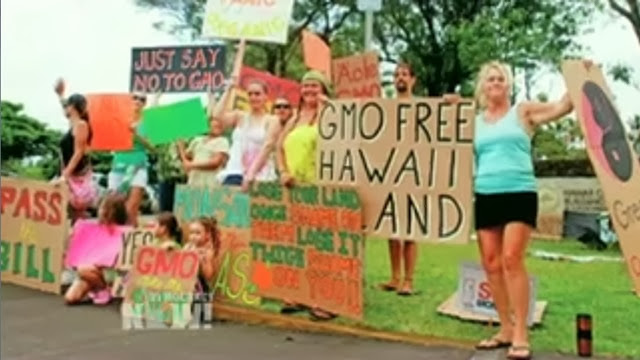 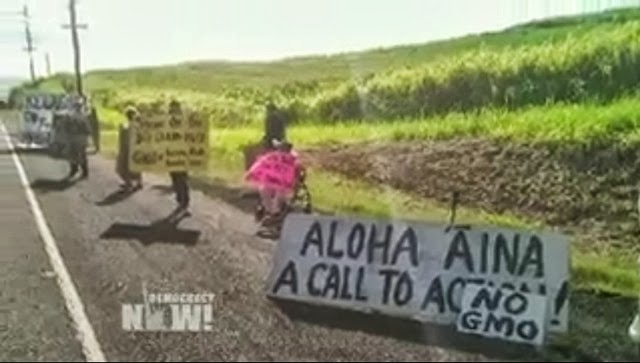 It’s good to see national (actually, international) coverage of this effort. The program is carried by something like 1,000 stations.

While the bill passed the County Council, it is not yet law. Joan Conrow reports on KauiEclectic today that a national advocacy network has been making hay of the bill anyway for its fundraising purposes. See: Musings: On Momentum (KauiEclectic, 10/22/2013). Joan’s coverage of the GMO labeling/pesticide issue on Kauai is the best that can be found on the web.

For a report of a bizarre flip by a councilperson at the meeting of the Kauai County Council at which Bill 2491 passed, Andy Parx’ How fast can you turn on a dime? (Got Windmills?, 10/16/2013) is a must read. No spoiler here, get it directly from Andy.

On Twitter, follow @GaryHooser, who has been in the forefront of the effort to gain GMO labeling and eliminate pesticide hazards on Kauai.

Democracy Now can be viewed on Oahu at 11 p.m. on channel 54 or again tomorrow morning at 7. On Kauai it can be heard on KKCR at 11 a.m. Check schedules for other islands, or go to democracynow.org for video and a transcript.

[disclosure: I am the presenter for Democracy Now on `Olelo on Oahu]